Not much time at my desk as the autumn season begins

You may have noticed that my written output has declined over the last few weeks – at least somebody has noticed, because I have had a slightly hurt enquiry as to whether I intend to cover a particular topic.

There are are various reasons for this, none of which is idleness or lack of interest. The first was the two-week holiday which we usually take in mid-September. Why then? North Cornwall, our usual destination, is inevitably overrun in the summer with families with school-age children. The prices go up, and every lane and beach is jam-packed with the vehicles and accents of London and the Home Counties. A poem on the wall of the house which we rent, a parody of a well-known Betjeman poem, ends with this line:

Sounds of Sloane Square on the air
And black retrievers everywhere. 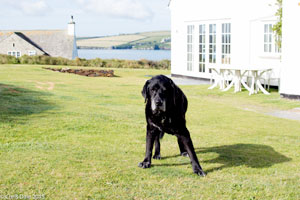 Our own black dog, Saxon the 15-year-old Labrador, nearly didn’t make it down there. Just before we went away, the decreptitude of old age took an apparent lurch downwards, and we booked an appointment at the vet which seemed likely to be a one-way trip. I said my goodbyes and went off to give a talk in Manchester, almost certain that I would never see him again. He likes going to the vet and perked up almost immediately, bounding into the surgery and seeking out the liver treats whose location he knows well. “I don’t think he’s quite ready to go” said the vet, and we agreed thankfully.

As I have recorded in previous years, I usually treat this holiday as “reduced output from a different location”, working, but not at the usual rate which starts at 9.00am and ends at 2.00am. This year, however, we filled the house with long-standing friends – a man I met at school in 1968, another whom I met on my first day at Oxford in 1973, and someone Mary Ann met when they were both engaged as cooks on a Mediterranean boat in 1980. We also managed to entice all three of our boys done there. Not much work was done.

Almost as soon as that was over I was off to the US for a week which embraced two sessions about cross-border eDiscovery at kCura’s Relativity Fest, a talk on the same subject with Cicayda in Nashville, and a panel at the EDI Leadership Summit in New Orleans. That added up to four sessions in three widely-spaced cities in four days, with the added bonus, if that is the right word, that the Schrems safe harbour judgment broke upon us just before I left, requiring me to recast three of my four sessions.

My son Will came with me and we filmed some video interviews. We now have more than 30 in the can which are awaiting my approval before being sent out to the subjects.

I was barely off the plane from New Orleans before setting off for Leeds for a session about CPR eDisclosure with Jonathan Maas of Huron Legal and Gordon Exall of Zenith Chambers. Big regional cities like Leeds have lawyers, both solicitors and barristers, who are a match for any London firm; the availability of eDisclosure services, from collection through to managed review, provided by Huron Legal and its rivals mean that you do not have to be a big firm to engage in document-heavy disputes.

Gordon Exall, author of the highly regarded Civil Litigation Brief, opened with a talk on witness statements and the gulf which often appears between the statement signed by the witness and the evidence which he or she gives in court. That was a free-standing message, but it was also a preliminary to my talk on the CPR as it relates to disclosure and to Jonathan Maas’ outline of the help which Huron Legal can give, particularly at the early stage when the lawyers are making ready to be informed and articulate about disclosure at the first case management conference.

Two days later we gave the same talk at Hardwicke in Lincoln’s Inn, at the end of a long day in which I went into Epiq Systems in the morning to talk both about the CPR and about Schrems and safe harbour. In between I had a working lunch with QuisLex. The intervals between these things were just long enough to get from one to the other.

This is all good stuff and exactly what I am supposed to be doing on behalf of my sponsors and for the wider cause. It is, however, incompatible with the production of articles, whether the short ones about appointments, product developments webinars, or the longer and more thoughtful ones.

The near-constant run of events does not stop there – next week brings us to the Lawtech Europe Congress, which this year moves from Prague to Brussels. I am moderating two panels there, one on cross-border discovery (again) and one on non-traditional sources of data. I will be in Belgium until Wednesday night, after which normal service will resume.