CEIC 2015 – forensics, eDiscovery and cybersecurity all in one place

Guidance Software’s long-running annual event CEIC will henceforth be known as Enfuse. My account below of the 2015 show was written before that news broke – I held it back so that I could include links to some of the videos we made there. Enfuse takes place in Las Vegas from 23 to 26 May 2016.

When you register at Guidance Software’s CEIC, you can add stickers to the bottom of your pass to show how many years you have been attending. The highest number is five, so if you have been going longer than five years, you have to add further stickers to make up your total. I have lost track of how many years I have been coming – I think it is eight or nine – and I decided to dispense with the stickers.

Not everybody likes Caesar’s Palace or Las Vegas, but what they lack in charm they make up for in efficiency and convenience, at least from a conference delegate’s point of view. The elevator nearest my vast room went straight to the conference floor and to a half-decent coffee shop. There are plenty of very good restaurants. There are rooms of all sizes to cope with crowded keynotes, the exhibit hall, the training sessions packed with computers, and the educational sessions of all sizes. CEIC attracted 1,600 delegates this year, up from 1,500 last year and Caesars Palace comfortably swallowed us all.

Las Vegas has another advantage for the British contingent – British Airways flies directly to it. Judging by the age of my plane, it is not considered a premium route, but BA kindly put me into First Class which offered some consolation, even if the steak is the same grey hunk of overcooked meat which you get further back in the plane; coming home, I elected to go hungry for 11 hours rather than eat the rubber chicken and congealed pasta (I think it was pasta). Perhaps I’ve been spoilt by too many flights with Emirates. No matter – I did not have to change planes, there was no opportunity for the usual US airline trick of losing the baggage, and, if the cabin was shabby, it was at least possible to work and sleep.

If I appear to focus unduly on the creature comforts side of attending a conference, that is because these events are arduous, particularly if you cross half the world to get there. The programme once you arrive is an unrelenting mix of sessions, social events and impromptu meetings. Good conference teams (and CEIC has a very good conference team) appreciate this and work hard to make it as easy as possible. 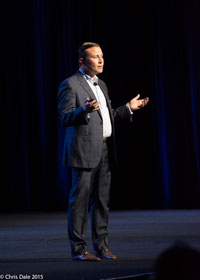 The new CEO is Patrick Dennis, whose opening keynote gave a hint of a new direction. Three things in particular struck me from it which accord with closely held principles of my own. The first is that, whilst there is plenty to fear in the world of cyber attacks, regulatory and compliance matters, and eDiscovery sanctions, there are also solutions, both of technology and of people, and we do not diminish our defensive posture by emphasising the more positive things.

The second, which ties in with something I emphasised at one of my panels, is that the areas in which Guidance Software specialises – eDiscovery, forensics and cyber security – increasingly come together in the hands of a single, multi-skilled, person or group of people in a corporation and need to be marketed accordingly rather than as distinct disciplines for disparate groups. 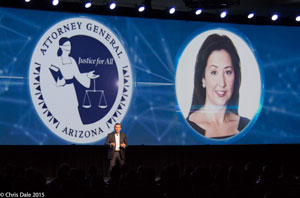 A third theme which recurred is a sense of shared endeavour and common purpose; Patrick Dennis focused very much on the opportunities for individuals and for business partners to make careers and build businesses together; he drew attention both to Guidance Software’s own staff and to those with whom it worked such as Sheryl Falk from Winston & Strawn, whose legal practice is bound up with the technology solutions from Guidance Software and others.

I had the opportunity to talk to Patrick Dennis afterwards. We covered much the same ground as he had covered in his speech, but he added this: progress is made either as a reaction to some cataclysmic event or by the slow and steady incremental adding of tools, skills and value. The disasters may get the publicity, and spur the decision-making, but it is the steady forward movement which solves the problems.

I took part in three panel sessions and my son William and I recorded four video interviews – quite enough for one week.

The first of my panels was moderated by Nick Pollard of Guidance Software in the UK and was called Digital investigations in international jurisdictions. We were slightly inhibited (or at least I was) by the fact that this was followed immediately by the panel on a similar topic which was my primary reason for being there, called International eDiscovery: Data Protection, Privacy and Cross-Border Issues. I was the moderator and had as my panel members US Magistrate Judge Andrew Peck, James Daley, now at Seyfarth Shaw and Scott Cohen of Winston & Strawn. 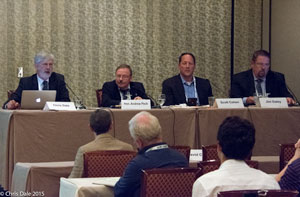 I saw a cartoon recently which showed an orchestra conductor reading a message which had been left on his podium; it read “Wave your arms about until the music stops and then bow”. I felt rather like this with a panel of this calibre: Judge Peck was the first person I ever heard talk about the conflict between US discovery requirements and EU data detection and privacy restrictions, and we have covered a lot of a lot of ground together on this topic since then. Moderating a panel an international panel with Jim Daley, I said, was like being asked to direct a film with Alfred Hitchcock in it; Jim has been at the forefront of the long battle to try and reconcile the conflicting positions on cross-border discovery, and many of us learnt at his feet. Scott Cohen gets his hands dirty collecting data in some of the most difficult jurisdictions in the world; unlike many law firms (who seem constantly surprised by the difficulties) Winston & Strawn has a checklist and a process for managing foreign collections which takes account of legal and practical things ranging from disparate legal requirements through to practical things like languages, cultural differences and border controls on taking equipment into a country and on getting data out again.

If this had been my only reason for going to Las Vegas, it was worth it.

My last panel was moderated by the excellent Scott Carlson, also of Seyfarth Shaw. Its subject was the way in which the discovery and information governance flow into each other, both as to the technology and as to the skills required to manage them. The other panel members were Jay Carle of Seyfarth Shaw and Sean Pike of IDC; 90 minutes raced past and I hope that the audience enjoyed the discussion as much as I did. We had little in the way of preconceived structure beyond some broad headings and no real idea as to what the others were going to say; if that sounds like a high-wire exercise, then it is one that I enjoy and it seemed to work so far as the audience is concerned (audiences get tired of panel members just reading out mini-lectures in sequence.

In addition to innumerable informal conversations, I recorded formal video interviews with the help of my son William. I interviewed Patrick Heim, Head of Trust and Security at Dropbox, who talked about the importance of file synchronisation and sharing to an increasingly mobile workforce; businesses, as well as their employees, benefit from the ability to work anywhere, but this must be balanced against security considerations, regulatory and compliance duties, and the need for companies to control data for eDiscovery purposes. Dropbox for Business is one of the answers, and its new alliance with Guidance Software is an important one.

Roger Angarita is Director of Product Management at Guidance Software. I interviewed him about the forthcoming EnCase 8 and what it offers for eDiscovery people, for forensics experts and for those concerned with cybersecurity.

Chad McManamy is the newly appointed VP of eDiscovery at Guidance Software. Interviewing him, I went through some of the results of Guidance Software’s recent survey of in-house counsel (you can find my article about that here with a link to the report itself; we have since done a webinar about the survey results with Scott Carlson and Chad McManamy – that is now available for download and the details are here).

Lastly, I interviewed US Magistrate Judge Andrew Peck, asking him about the present state of acceptance of technology-assisted review in US courts, about the (to me) irrational fear of “black boxes”, and about judges presumed to be hostile to technology.

This was, as always, a good show. I needed no persuading as the value of mixing eDiscovery, forensics and cybersecurity tracks, but that value was confirmed to me by a judge who had come to take part in the judicial eDiscovery panel; he attended sessions on the forensics track, learning about how people use social media and mobile devices and about how modern forensics tools can follow in their tracks and, where appropriate, bring them to justice. There are not many judges in any jurisdiction who are willing to do that, nor are there many events at which they would have the opportunity.

The Enfuse website, already accepting next year’s registrations, is here.

There are some photographs here, mainly of the opening keynote session and my cross-border session.

I have been an English solicitor since 1980. I run the e-Disclosure Information Project which collects and comments on information about electronic disclosure / eDiscovery and related subjects in the UK, the US, AsiaPac and elsewhere
View all posts by Chris Dale →
This entry was posted in CEIC, Discovery, eDisclosure, eDiscovery, Electronic disclosure, Forensic data collections, Guidance Software. Bookmark the permalink.