Distracting a lawyer’s attention with your little hammer

My article of yesterday talked about the good sense in getting to know the things which trigger antipathy among potential buyers, in this case of eDiscovery / eDisclosure software. I linked to a post of mine which included this paragraph about an article:

You may wonder, incidentally, what is the relevance of the little hammer which has been added as an illustration to the article. It implies a concealed question: “In which of these jurisdictions does the judge double as an auctioneer?”. I am at liberty to reveal the answer which is “None of them”. It derives from the overlap between metonymy and stock image collections.

Nothing provokes an English lawyer to contempt more readily than the sight of a legal article or advertising material illustrated by of one of those little mallets which auctioneers use when selling sheep in country markets. As you will have gathered, I am not above joining in the sneers at the same irrelevant image being used over and over again in an effort to establish a mental picture for the reader.

Does it really matter? I am just tired of the unimaginative cliché. Most are cross because it is just wrong – English courts do not, and never have, used gavels. That does not perhaps matter too much in general – who cares about old lawyers muttering into their port? It does matter, however, if you are trying to persuade those same lawyers that you understand their legal system; it won’t lose you a sale which is reasonably likely to happen anyway, but it may distract those who are looking for an excuse to take the subject away from what you want to talk about. 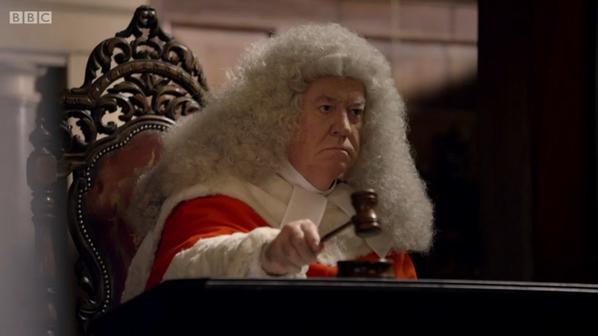 The subject came up this week in the Twitter commentary on a BBC television series called The Scandalous Lady W. This week’s episode was derided for all sorts of reasons, but the chief criticism among the lawyers in my Twitter timeline was of the moment where a judge, dead sheep on head and mouth turned down, banged his little mallet on the desk and shouted “Order! Order! Silence in Court”, as if the Speaker of the House of Commons had wandered into a 1970’s American police procedural (or is he knocking out his pipe – opinion was divided). None of those who commented on this had much to say about the programme itself.

You can mock all you like at those (sometimes including me) whose attention is diverted by such things, but if you are selling to an audience with known prejudices, it is as well to avoid exciting them, so as to keep their attention on what you are trying to sell.

[Picture from the BBC via Inappropriate Gavels @igavels on Twitter]

I have been an English solicitor since 1980. I run the e-Disclosure Information Project which collects and comments on information about electronic disclosure / eDiscovery and related subjects in the UK, the US, AsiaPac and elsewhere
View all posts by Chris Dale →
This entry was posted in eDisclosure, eDiscovery. Bookmark the permalink.