Every year between 2007 and 2019 I went to Legaltech (later Legalweek) in New York at the end of January. I missed 2020 because I had a hip replacement on 30 January, and consoled myself with the knowledge that I could go in 2021. So much for that.

I ought to say, I suppose, that I miss the glamour of international travel which used to dominate past years. In truth, I have done less of it recently anyway (it makes me tired just looking back through the accounting records from some past years, full of flight, taxi and meal receipts from different cities), and I was content with just the must-attend Legaltech and Relativity Fest. Now even they have gone for now (both will be back, I am sure).

Moderating a Relativity panel at Legalweek in 2018. I remember ties and suits, just

Virtual panels lose the interaction which you only really get from being there with everyone, but I have enjoyed doing them. The interviews which we used to do at events have become virtual ones. I did like the buzz around the live ones – meeting the interviewees, waving to passers-by, rushing off in the gaps between takes to see the rest of the event – but they are easier to set up from my desk and less wearing. 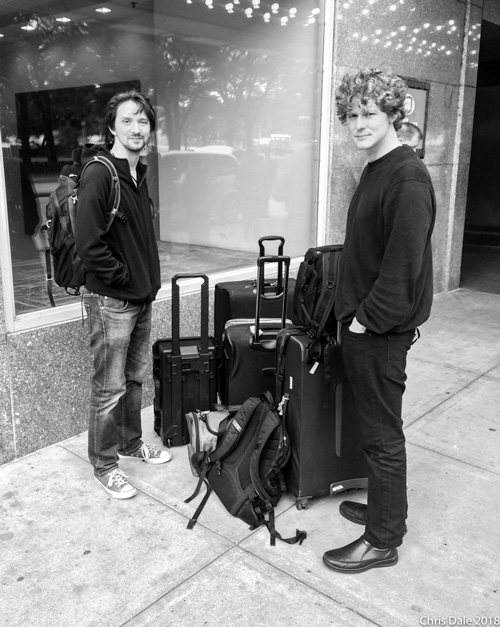 Compared with many, I cannot complain about the effect of lockdown either on business or on daily life. I still hanker, just a bit, for the big events in New York or Chicago.

Legalweek has become Legalweek(year), a series of five virtual events between February and July, each with its own agenda. Some things remain more or less the same and one of these is that Relativity has an International Panel. It is at 15:00 on Wednesday 3 February and has the title Your Best Defense: A Data Privacy and Data Protection Roadmap for Legal Teams. The speakers are Meribeth Banaschik of EY Germany, David Horrigan of Relativity, Susan Cone Kilgore of the U.S. Department of the Army, Debbie Reynolds of Debbie Reynolds Consulting LLC, and Inés Rubio of FTI Consulting in Dublin.

Mention of FTI Consulting’s Inés Rubio brings me to her recent appointment as a Senior Director with FTI in Dublin. I moderated an international panel for Relativity last year on which she was a welcome participant. There is a Q&A with Inés on the FTI blog in which she emphasises the closeness of traditional eDiscovery and the information governance work in which FTI Technology was a pioneer when IG first emerged as a distinct business need.

In the Q&A, Inés Rubio identifies data protection as a key issue in Ireland, as elsewhere, not least because of an anticipated increase in regulatory investigations, especially in financial institutions. Her story of a company which learnt about the value of IG by having to trawl a petabyte of data on a legacy system is a parallel for others I have heard from FTI. It was always predicted, not least by me, that GDPR would be an accelerator of good practice in data management, and here’s a DSAR (data subject access request) doing just that.

The Sedona Conference has published the public comment version of its new Commentary on Ephemeral Messaging. I have not read it yet, but the Sedona Conference rarely sets a foot wrong with its informed and readable commentaries on the many different faces of eDiscovery. The always well-informed Philip Favro of Driven said (when I mentioned the international relevance of the commentary on Twitter) that “Working Group 6, Sedona’s cross-border group, commissioned and oversaw the development of the commentary. The paper is specifically focused on cross-border issues, though by necessity it deals with several US problems associated with ephemeral messaging” and added that Sedona would “welcome your comments on the paper, particularly regarding the five guidelines on the use and treatment of ephemeral messaging.”

The Judiciary UK website has published the text of a speech given by Sir Geoffrey Vos, the new Master of the Rolls, at a Law Society webinar on Civil Justice and Lawtech on 28 January. His title was Reliable data and technology: the direction of travel for Civil Justice.

There is a lot in its five pages, which are premised on the need for “following a direction of travel that is aimed at creating the civil justice system of the 21st century that will give consumers and businesses confidence about the future.”

video hearings do not, in themselves, change the system itself. They merely change the mechanism by which we hear cases.

You might apply that to almost any aspect of the MR’s “direction of travel”. We can, for example, have another go at modifying the Civil Procedure Rules (Sir Geoffrey’s view is that Lord Woolf’s reforms came 10 or 15 years too early) but if we end up with another “2,000 page user manual” (as someone once described the White Book) we will not have moved far – just “changed the mechanism by which we hear cases”.

When I am usually packing my bags for New York, I am instead out walking the dog on Oxford’s Port Meadow. We have had a little snow, but mostly it looks like this. Quite a contrast with New York, but lovely to me.

I have been an English solicitor since 1980. I run the e-Disclosure Information Project which collects and comments on information about electronic disclosure / eDiscovery and related subjects in the UK, the US, AsiaPac and elsewhere
View all posts by Chris Dale →
This entry was posted in Discovery, DSARs, eDisclosure, eDiscovery, Electronic disclosure, FTI Consulting, FTI Technology, Information Governance, Relativity. Bookmark the permalink.