Discovering the value of rest

In which I belatedly (after 42 years of work) consider the value of just switching off occasionally and, as a side-note, observe that while you won’t necessarily get opportunities by being there, you certainly won’t get them if you are not. These two things may conflict with each other.

I have always rather under-estimated the value of rest. It is not the same as relaxation. A hearty walk, or mountaineering, or digging the garden, may be relaxing, depending on your personal taste, in that they take your mind and body away from the business of working, but they are not restful.

I realise, a few decades late, that I have conflated the two things. I have also seen rest as an army commander might see it on a route march – just enough to get soldiers back on their feet for the next stage (or, in my case, enough to keep my eyes open while I write the next article).

The subject comes up because I am (as most of you know by now) stuck at home with a new hip when I should be at Legalweek in New York. I am not sure I would have been up to the rigours of Legalweek this year on the old hip, but the prospect of an imminent operation date was enough on its own to keep me at home. I was offered a date last week on three days notice, and I am glad I stayed at home for it.

Although the operation involved driving a metal stake down into the top of the leg, the pain is not a problem. That is a measure perhaps of a good surgeon, but also of how much it has hurt untreated for so long. After years of Naproxen (I bought 600 pills in New York last year) I am now on modest amounts of paracetamol. The hole in my leg barely troubles me. I have a crutch to get about on. I can go up and down stairs, albeit with some effort and care. My wife takes care of me, as I did for her when she had a new knee last year

So why not get straight back to work, as I fondly imagined I would? You don’t need to walk to write articles, just sit at a desk. The answer lies in this hitherto undiscovered concept of rest.

Walking around on a crutch may not be particularly painful, but it is tiresome and tiring, not least because of the constant strategising to cut down down “journeys” even if they are only across the room. To take an apparently trivial example, how many trips do you need to bring toast, butter, marmalade, and a knife, spoon, and plate, across the room when one arm is leaning on a crutch?

That is merely a reason why rest is a good idea in these particular circumstances. It is not really an argument for the benefits of rest generally. I don’t need to make a case for that, even if I were minded to suggest how other people run their lives. All it amounts to, for me, this week, is that I have switched off from work even though it would be physically possible to go on (as with the soldiers who have had their 10 minute break on the route march). I have taken one work-related call, and done a few Twitter RTs and LinkedIn Shares, but beyond that I have not engaged at all.

That is quite hard in a week when the biggest industry event is going on in New York. News races by, both formal press releases and gossip. Here’s something about the panel I should have been on; there’s a press release which is actually interesting as well as falling within my working remit; pictures come by of dinners I would usually attend, of people I like to see beyond my professional duties, of places I have visited in this week every year. The temptation to join in is quite high.

But I have resisted. Nothing matters more than getting back on my feet, and the best route to that is to keep mind as well as body in neutral. I can catch up with the news afterwards like I always do (I never write while at busy events anyway, and even forget about Twitter). Nothing is lost by just switching off for a few days, and the refreshment value is enormous.

So I’m passing the time by looking at my photographs – not the bulk tagging, winnowing and backing-up tasks which are more like a work project than relaxation, but editing a chosen few. I am reading a book. I am engaging in Twitter discussions which I usually skip past. I can almost literally feel the benefit feeding through to that metal stake in my leg.

See you on the other side, ready in mind as well as body for the next round.

There is a parallel, by the way, between photography and going to big shows like Legalweek. You may not get the lucky shot by trailing up to a hillside above Lincoln; you may not bump into a big business opportunity by going to New York for Legalweek.

But you’ll get neither if you don’t turn up. I did not, for example, expect the Red Arrows to plant themselves neatly between the towers of Lincoln Cathedral while I was standing there, camera in hand, last week. What business equivalent might I have won by being at Legaweek? It doesn’t matter. I’ve got my new hip. 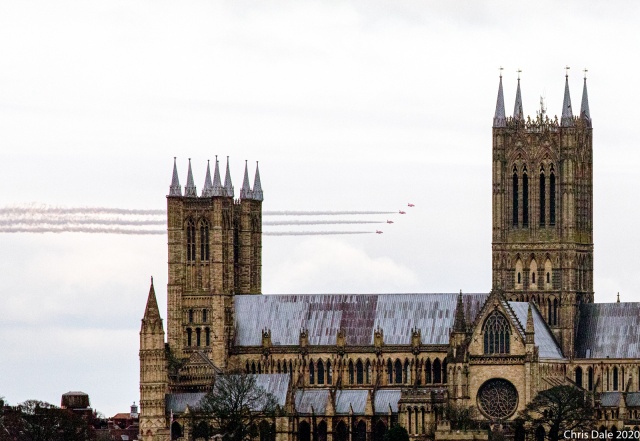 I have been an English solicitor since 1980. I run the e-Disclosure Information Project which collects and comments on information about electronic disclosure / eDiscovery and related subjects in the UK, the US, AsiaPac and elsewhere
View all posts by Chris Dale →
This entry was posted in Discovery, eDisclosure, eDiscovery, Electronic disclosure, LegalTech, Legalweek. Bookmark the permalink.