I went this week to an evening session organised by ACEDS and sponsored by Integreon whose purpose was to review the progress of the disclosure pilot in the 10 months since it began.

The speakers were Ed Crosse of Simmons & Simmons, Charlotte Hill of the Junior London Solicitors Association, Chief Master Marsh, and Lucinda Orr of Enyo Law. The moderator was the always-excellent Vince Neicho of Integreon.

They packed a lot into an hour. I serve you best, I think, if I set down the main points in a fairly short form:

Despite an intense campaign of information sessions and publicity, to say nothing of a general obligation to keep up with the rules, not everyone had got the message that the pilot existed, still less what its implications are. “Pilot? What pilot?” does not really seem an adequate response.

Chief Master Marsh observed that a properly completed Disclosure Review Document (DRD) is really efficient from his point of view compared with wading through correspondence (often acrimonious correspondence) about disclosure. I remember a long-ago session about an earlier rule change, where a solicitor expressed the hope that we would see an end to correspondence saying “We refer to the fourth paragraph of our third letter of yesterday…” Judges do not have time, still less the patience, to deal with this. The DRD forces attention on agreeing as much as possible and setting out clearly what is and what is not agreed.

Disclosure remains something lawyers like to fight about, attacking and defending their positions with a zeal which is not as helpful as they seem to think.

The panel referred to a report on the pilot which gave them some statistics about its use. I hope that we will be able to see this in due course.

The Disclosure Guidance Hearing, despite that word “Hearing”, is really just a discussion with the judge about outstanding points. It is not particularly helpful when parties send QCs along to argue heavy points. What is needed is the presence of the people closest to the task. The 30 minutes allowed by the rule is probably not long enough.

We do not particularly want case law at this stage or (as one panel member put it) “we don’t want the Court of Appeal expounding on disclosure”. Much of the point is that every case is different, and prescriptive judgments purporting to draw points of general application from specific circumstances do not necessarily make it easy to do the right thing for any particular case thereafter.

I paraphrase somewhat in reporting this. A good example (not mentioned at this session) is the judgment in the Triumph Controls case (decided on the pre-pilot rules – I wrote about it here) in which the judge, no doubt unintentionally, appeared to resurrect the idea that manual review was some kind of gold standard, and managed also to imply that adherence to orders was more important than doing the right thing (I am not urging non-compliance in saying this, merely observing that the judge does not seem to have considered whether the unauthorised variation had actually produced a better result). If this sounds a little unfair on the judge, I have heard reports of lawyers unwilling to consider technology-assisted review and/or unwilling to discuss variations to orders because of Triumph Controls. That was far from the judge’s intention, but it supports the idea that cases are not necessarily helpful, particularly to people who don’t read them properly.

Chief Master Marsh has not personally come across any cases in which technology-assisted review came up as an issue, although other judges may have done. That may be because parties are just getting on with using it. It may also be because DRDs take place at the point of scoping disclosure, perhaps before people have been able to apply their minds to the right methods (although the DRD is supposed to be a point at which the use of technology is discussed).

Chief Master Marsh was keen to emphasise that the aim of the new rule is not to stop disclosure where it is justified.

There was a general request for feedback on the DRD from those who have used it.

At the moment, the DRD is merely a Word document. It would be very helpful if somebody would put it on a shared platform designed to be used collaboratively.

Much more than this came out of the evening, but these were the main points. I was left with the impression that much of the muttering which was heard at the start has died down and that, although there is still some resentment (not least from clients) about the front-loading of costs, there are few, if any, who would go back to the old way of doing things.

There was a good turnout. We could do with more lawyers from firms and legal departments at these events, mainly so that we can hear from them rather than merely preach at them.

Many thanks to ACEDS for organising it, to RPC for hosting it, and to Integreon for sponsoring it. 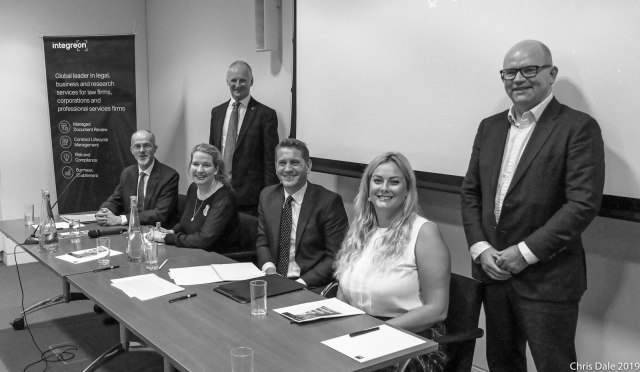 The panel with Mark Brannigan of AON, responsible for education at ACEDS UK Chapter

I have been an English solicitor since 1980. I run the e-Disclosure Information Project which collects and comments on information about electronic disclosure / eDiscovery and related subjects in the UK, the US, AsiaPac and elsewhere
View all posts by Chris Dale →
This entry was posted in ACEDS, Discovery, eDisclosure, eDiscovery, Electronic disclosure, Integreon and tagged Vince Neicho. Bookmark the permalink.