An article called The informed patient by Dr Helen Salisbury in the British Medical Journal interested me not merely because I am an occasional patient at Dr Salisbury’s practice, but because what she says in the article is similar to a change in ideas in the relationship between professional advisers (lawyers and eDiscovery providers in my world) and their clients.

The central part of Dr Salisbury’s article is about patients who feel apologetic – guilty, even – about having researched their symptoms before approaching the doctor:

the apology I find the most surprising is when patients “admit” to having informed themselves about their symptoms or illness. “I’m sorry doctor, I know I shouldn’t . . .” they start, apologising for what’s surely the most obvious response to an unfamiliar symptom—looking it up online

Patients seem to fear being “disrespectful” at apparently “casting aspersions” at the doctor’s expertise. They are expecting this reaction: 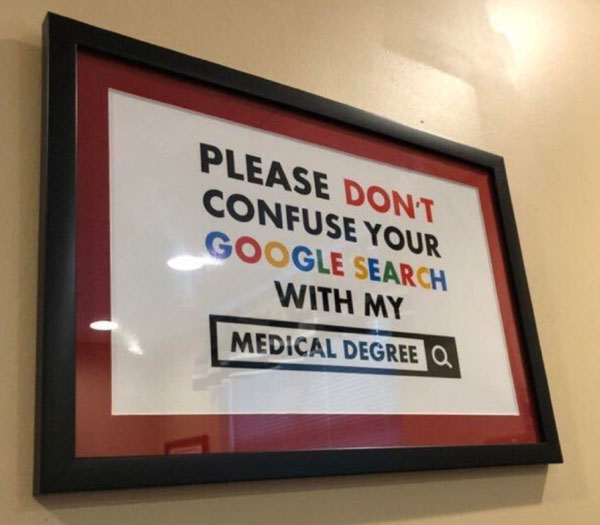 Dr Salisbury says that what she is looking for is “a meeting between equals, working together to solve a problem”.

The approach beginning with “What do you think the problem is?” may, at the least, enable the GP to deal with a concern which is greater than warranted by the circumstances. There is also some merit, perhaps, in the patient having identified a solution, or at least a step towards remediation, for themselves. The ambition is not some kind of compromise between the patient’s ideas and the doctor’s professional advice, but is a way of ensuring that that advice is more likely to be accepted.

I saw a tweet recently which (I summarise) said “Your one-hour lecture on my problem doesn’t match my 10 years of living with it”. That is not necessarily a rejection of the medical advice, but an assertion that the patient does at least know something about the practical ways of dealing with the problem.

I tweeted this in reaction to the article:

…with a follow-up making the link to clients:

The subject has come up twice recently. Bob Ambrogi, in his article Legal Tech For The Legal Elite, observed that the clients do not seem to have a seat at the table at which lawyers and others discuss the future of legal practice.

An even closer parallel comes in an interview which I did recently with Paul Mankoo of Inventus which will be published shortly. In it, Paul Mankoo drew attention to a change in the relationship between eDiscovery providers and their clients. In the old days, he said, the adviser would recite the standard practice and would expect the client to comply. Now one begins (or should) by asking the client what their experience has been (perhaps they have been there several times before) and ask about their own internal practices, before making a recommendation.

As with the doctor, the lawyer or legal services provider with this starting-point is not going to compromise his or her professional judgement nor sacrifice accepted standards to keep the client happy, but it seems foolish to ignore the input which a client, particularly an experienced one with its own procedures, can bring to the subject.

There is an example. About 10 years ago, at a conference, I heard an in-house lawyer at a London bank talk about a disclosure application attended by lawyers on the bank’s behalf. The lawyers had agreed a time limit for the production of documents without reference to the clients, and the client was furious – given a few days longer it could have done the job with its own resources; stuck with the agreed timetable, it had no option but to engage expensive consultants.

My sympathy for them was moderated by this question – why were they not at the hearing? They could have given their own informed input into the discussions. US Magistrate Judge Andrew Peck (now retired) often says, “Bring your geek to court”. We will, I think, see a growing expectation on the part of the courts that the clients will be actively involved. In RBS Rights Issue Litigation [2015] EWHC 3433 (Ch), the judge explicitly commented on the absence of client input into the process.

As with Dr Salisbury and her patients, no one is suggesting that the client’s wishes should override professional duty or compliance with the rules. It makes sense, however, to involve them in the discussions, whether as doctor-patient or adviser-client.