The career of my friend Patrick Burke illustrates the range of opportunities open to those with legal and technology skills.

One of the themes which recurs as I speak and write about eDiscovery and its related disciplines is that skills developed for one purpose may be relevant in another, and that eDiscovery and all the subjects which surround it have a voracious need for experience.

As new fields open up, it is obvious that that experience is going to have to be ported over from somewhere else. Some of these things are developments of older things – the law has long had a concept of privacy, for example, but it is only relatively recently that computerisation, data analytics, the Internet, and mass communication have made it a field which dominates other discussions. Security breaches used to be limited by the physical reach of the aggressor. Until very recently we had not heard of cryptocurrency and blockchain.

It is the job of government simultaneously to encourage development in new areas while regulating it. Heavy-handed regulation stifles innovation; untrammelled technological development put businesses and consumers at risk. Facebook is the obvious example of a project which began with modest social ambitions and turned into a monster, threatening global politics and economics as well as personal privacy.

There is a shortage of people capable of managing these developments, of striking a balance between the encouragement of innovation and the protection of users. Where do these people come from? Many of them come from law, not necessarily because they know black letter law, but because the training and practice of the lawyer develops an attitude both enquiring and careful which is ideally suited for this new world. Some come from technology background, often from eDiscovery.

An example of this is my old friend Patrick Burke, with whom I have done panels, webinars and interviews over many years (him on the left, me on the right in this picture from an international and privacy panel at Relativity Fest in 2015) 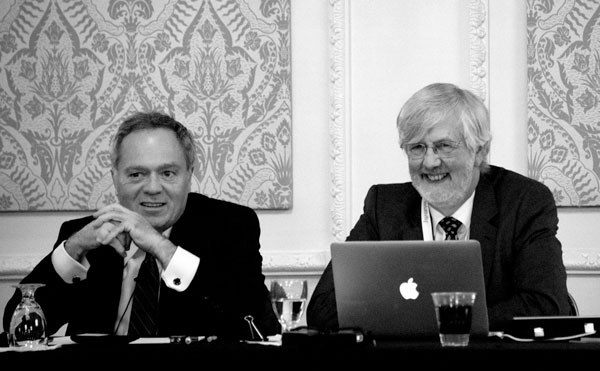 He was a lawyer who moved into technology, extending his reach from eDiscovery into data privacy, cybersecurity and information governance. He taught for years at Cardozo School of Law in New York City, and founded Cardozo’s Data Law Initiative. He is now New York State’s top regulator for cybersecurity, cryptocurrency and blockchain innovations.

Patrick Burke oversees the Office of Financial Innovation at the New York State Department of Financial Services (“DFS”), the state’s chief enforcer on Wall Street. DFS is headed by Maria T. Vullo, a former Paul Weiss partner with a reputation for watchful enforcement and progressive policymaking.

New York state has the US’s only real cybersecurity regulation. It requires all financial institutions operating in New York to file annual certifications of their compliance with the not inconsiderable requirements of the regulation. Patrick Burke has policy and supervisory responsibility for that regulation, and oversees a team of trained cyberexaminers who come into institutions to verify compliance.

His Office of Financial Innovation also administers DFS’ first-in-the-nation virtual currency regulation, which requires entities engaged in virtual currency business activities to obtain the Department’s BitLicense. In order to qualify for a BitLicense, cryptocurrency exchanges must meet standards for prevention of money laundering, anti-fraud, consumer protection and, of course, cybersecurity. Patrick Burke has examiners to verify compliance with that too.

His Office also keeps tabs on blockchain innovations generally in the financial sector. With blockchain being looked upon as a disruptive technology that may revolutionise the way business will be conducted, that is no small responsibility. Patrick Burke’s two decades of innovation in e-discovery, information governance and data protection, bring perspective.

The lesson here is that the skills acquired in your current role can be transferred to tackle the new data challenges ahead. Facility with information technology, skill at brokering communications between IT, Legal and the C-Suite, and attentiveness to best practices and compliance, are prerequisites for moving ahead to tomorrow’s data challenges, from cybersecurity to blockchain.

The point here, as I said in opening, is that experience is portable between disciplines. The real interest, for me, lies in the fact that those starting their careers now don’t know what the target is. When I first went to work (1978 since you ask), the career path for a lawyer was fairly circumscribed. Yes, there were discrete and varied areas of specialisation, and many lawyers took their skills and experience to other occupations. We could not guess at the rate at which this would change or at the new subjects which would open up for those willing to embrace them. Most of the subjects for which Patrick Burke is now responsible did not exist when he qualified as a lawyer; even the words to describe them had yet to be invented. What opportunities will exist for those starting now?

I have been an English solicitor since 1980. I run the e-Disclosure Information Project which collects and comments on information about electronic disclosure / eDiscovery and related subjects in the UK, the US, AsiaPac and elsewhere
View all posts by Chris Dale →
This entry was posted in Blockchain, Cyber security, Data privacy, Data Protection, Data Security, Discovery, eDisclosure, eDiscovery, Electronic disclosure, GDPR and tagged Patrick Burke. Bookmark the permalink.