New and enhanced machine learning and visual analytics in Brainspace 6

Discovery remains a major purpose for Brainspace but analytics tools like this can be used for much more than conventional litigation and investigations, and in very different ways.

PwC partner Umang Paw has written in an article called Are you using AI to your advantage in investigations about how powerful extensions to eDiscovery tools are “reinventing the art of the possible in complex investigations” . He says:

With their arms around large quantities of structured and unstructured data like this investigators ‘simply’ ask the system to prove or disprove their hypotheses. Learning dynamically, digital investigations software such as Brainspace Discovery offers interactive visualisations and search tools that reveal stories that could otherwise often remain hidden in the data. Thanks to solutions like this, investigators have everything they need to create networks of evidence, ultimately revealing what happened and who was involved. Previously, it would have taken weeks or months to get to the answers. Now it can take just days.

It is relevant to anything where quick answers are needed from masses of data. The example which hooked me on Brainspace was an interrogation of news data which showed that Theresa May had very little to say about Brexit right up until the day she became Prime Minister, when the subject apparently became all-consuming for her. The by now well-known Brainspace Concept Cluster Wheel threw out this information visually and clearly from political reports of the time. 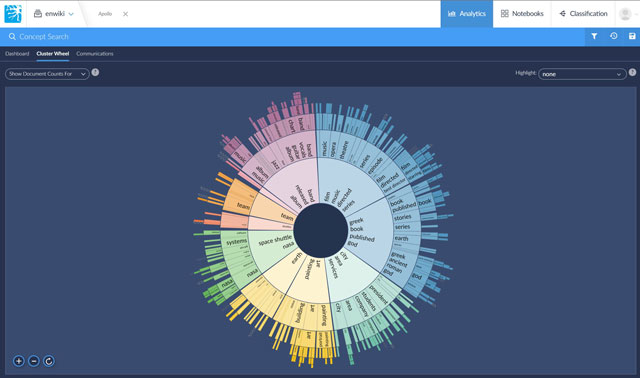 I saw Brainspace 6 while at the Nuix User Exchange in California earlier this week. One of the ambitions behind the redesign is to take the user – the lawyer or investigator, and not necessarily a technician – into intuitive interaction with the data, opening up lines of enquiry which had perhaps not been in the user’s mind when starting.

The Brainspace tagline is “Augmenting intelligence to accelerate human potential” with the implication that the technology provides magnifiers for the skills and intelligence of the investigator.

There is a webinar on 27 September at 10.00am CT for the US and 10.00am BST / 11.00am CEST for the EU. The webinar will cover the new features and capabilities, Brainspace’s new continuous multi-modal learning, its predictive coding models, and workflows designed to maximise human input during an investigation. You can register for the webinar here.

Brainspace is part of Cyxtera, which embraces a range of search, investigation and cybersecurity tools, as well as 57 data centres around the world. I will be writing shortly about Cyxtera.

I have been an English solicitor since 1980. I run the e-Disclosure Information Project which collects and comments on information about electronic disclosure / eDiscovery and related subjects in the UK, the US, AsiaPac and elsewhere
View all posts by Chris Dale →
This entry was posted in Brainspace, Discovery, eDisclosure, eDiscovery, Electronic disclosure. Bookmark the permalink.