A wide range of topics at the AccessData User Summit

I went last month to the AccessData User Summit at an attractive resort in San Diego. I moderated or took part in four panels, learnt a lot, met up with old acquaintances and made new ones. It was an extremely useful and enjoyable event, an impression which seemed to be shared by those I spoke to.

The Summit’s agenda illustrated the very broad range of subjects which now surround the “old” skills of forensics and eDiscovery. As well as providing information directly relevant to the delegates, it was designed to extend the understanding of AccessData’s users beyond their immediate responsibilities.

The last time I went to this event, some years ago, forensics and eDiscovery posed problems enough for businesses, and AccessData’s product range matched the issues. Since then the problems have expanded to embrace a much wider range; the “old” headings have expanded to take in Big Data, mobile forensics, new data types and sources – and new problems. AccessData’s range of forensics and eDiscovery products and services has marched with the times.

The topics at my own sessions included internal investigations, international developments in discovery technology and in privacy and data protection, a comparison between recent developments in the US rules of civil procedure and those in the UK and elsewhere, and the overlap of forensics and ediscovery. Other topics on the agenda included artificial intelligence and the spread of cyber risk.

Some other events of this kind sprawl so widely that you get lost in their agendas. This one, broad though it was, was compact and accessible, tempting the largely technical audience beyond their own immediate interests and into the wider concerns of their clients. 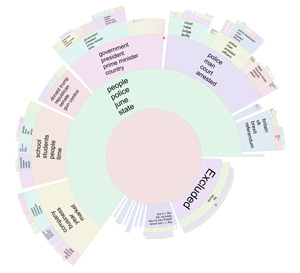 The opening session pitched us straight into the subject of artificial intelligence and its application to legal problems including eDiscovery. Dave Copps, CEO of BrainSpace, opened with a short talk which stressed the value of visualisation tools to render the output of the analytics comprehensible (and instantly so) to the user. Matt Coatney followed with a talk primarily designed to show how AI is taking over other areas, and not just of work.

My first panel was on internal investigations in the company of James Blackburn of Syntricate. Internal investigations are on the rise for multiple reasons – I pointed to a recent KPMG paper on payments fraud which identifies the reasons why payments fraud is on the increase, including outdated processes, economies in finance and staff, budget pressures on the use of enhanced technology and multiple access points by which fraud can occur.

Companies are now subject to closer scrutiny, I said, and not just by state officials. Regulators talk to each other. They tend to be global in nature, raising cross-border implications. Companies must be alert not just to US laws, but EU privacy laws and the UK Bribery Act. This will get worse with the GDPR which affects any organisation processing EU data (and not just that of EU citizens). There may well be criminal implications within some of these subjects.

Beyond that, there are employee and union relationships to consider, reputational issues, share price implications, potential interest from regulators, privilege points, and the threat of future litigation. This served as an introduction to James Blackburn’s summary of what can be done to anticipate such problems and to mitigate their effects.

My main event was the keynote panel with US Magistrate Judge Andrew Peck. Our scene was an international one, embracing the spread of technology-assisted review and the changing landscape of privacy and data protection. As well as going through the formal development – the TAR cases and the pending privacy and data protection laws – we discussed the obligation to be proportionate and to decide what “good enough” means when trying to align time and expense with the objective. You may get different balances as between different cases, in different courts, with different issues, claim values and data volumes, and the test is different for criminal cases. All require, however, that you know what tools exist, that you have the skill to use them, and the judgement to know when to use what tools.

All the points we made about the proportionate use of technology in domestic litigation apply in magnified form when there are cross-border implications. If you propose to argue in a US court that the data protection regime in, say, the EU, inhibits you from complying in full with a US discovery request, then you must be prepared to articulate that position based on quickly-acquired knowledge of the data as well as an understanding of the respective laws in the relevant countries. The technical audience which one expects at an AccessData conference have a role to play in this and need some understanding of what the implications are.

Changes to the Federal Rules of Civil Procedure

Oronde Ward, AccessData’s Director of Legal Solutions, was the moderator for a session on the changes to the Federal Rules of Civil Procedure. Judge Peck gave us his usual effective explanation, cutting briskly through the formalities and explaining what the courts actually expect from parties. My role in the session was to point out the parallels and differences in the UK.

If cyber risk does not frighten you, you’re not listening

Ed McAndrew of Ballard Spahr gave us a frankly terrifying look at the increase in cyber risks. We have moved, he said, from theft to disruption and everything is a cyber investigation.

Everything is provable through some electronic form, and the human as eyewitness becomes an endangered species when so much of about where we go and what we do is recorded via our own smartphones.

ISIS does not need to come to the US in order to radicalise or influence people; it can do that without setting foot in the US. Nation-state tools are falling into the hands of anyone with access to the dark web, and cyber criminals are better at securing their data than their victims are.

This is not just technology problem, Ed McAndrew said. One needs to think through the sequence of events before acting and ask “Where is this going to end?”. Human activities and happenstance may contribute equally with sophisticated learning electronic tools.

On the closing day, I moderated a panel designed to draw attention to the crossover between forensics and eDiscovery. The panel members were Judge Peck, Chad McManamy and Michael Bandemer of Berkeley Research Group, Alex Poelma of Belastingdienst, and Ed McAndrew of Ballard Spahr.

The best technical explanations come with a good story attached, and the Berkeley team had a story involving shadow volume copies. It raised interesting questions about competence in eDiscovery and, specifically, about the difference between data which is genuinely inaccessible and or has been destroyed, and data which is lurking but which has not been identified. The upshot of the tale they told was an eDiscovery sanctions hearing resulting in sanctions in the sum of an excess of $7 million.

Judge Peck will doubtless look forward to being able to ask the next hapless lawyer who appears before him “Have you thought about shadow volume copies?”.

Beyond the general messages of competence lies another one, about the need for human wisdom. It is not enough simply to buy the right tools, nor to build the right team. Someone must stand back from the problem and apply some wisdom to it.

San Diego is a long way to go to moderate or take part in a few panels. It was worth it so far as I am concerned, not just for that opportunity, not just for the chance to hear other people speak, but for the opportunity to mix with and talk to people who get their hands dirty working at the front-end of eDiscovery, forensics and the rest. You don’t pick that up by sitting in an office in Oxford reading about the subjects.

I’m not complaining either about the venue or AccessData’s generous hospitality. My room looked out over the beach….

We were taken to a very fine restaurant where we watched the sun dip down into the Pacific as we ate.

The scene below (there are more here) shows that this was a very pleasant place to spend a few days in between the sessions.

I look forward to next year’s event.

I have been an English solicitor since 1980. I run the e-Disclosure Information Project which collects and comments on information about electronic disclosure / eDiscovery and related subjects in the UK, the US, AsiaPac and elsewhere
View all posts by Chris Dale →
This entry was posted in AccessData, AI, Artificial Intelligence, Brainspace, Cross-border eDiscovery, Cyber security, Data privacy, Data Protection, Data Security, Data visualisation, Discovery, eDisclosure, eDiscovery, Electronic disclosure and tagged Dave Copps, Ed McAndrew, Judge Peck. Bookmark the permalink.