As I noted when I wrote about it in advance, kCura’s Relativity Fest London has been moving over the years to become a full-blown eDiscovery / eDisclosure event and not just a platform for launching kCura initiatives and for networking. There was plenty of that as well, but kCura’s success with this event must be tough on those whose business is  organising commercial conferences. kCura has collected pictures, quotations and other snippets from the day here.

My window on the event is perhaps a narrow one since I missed most of the sessions, the networking and, indeed, the food (which, as always at the etc.venues place at 155 Bishopsgate, looked very good). We recorded a number of video interviews which will appear over the coming weeks, and I did two panel sessions.

CEO Andrew Sieja retains his ability to sound simultaneously like one of the lads sharing exciting news and like a hard-nosed businessman with serious messages for the future of eDiscovery.

Are there any serious players left who doubt the value of analytical tools in the taming of eDiscovery volumes and costs? One of the detectable themes at Relativity Fest was the growing understanding and take-up by users of the full range of tools which ease the process of getting the job done quickly and effectively, whether used discretely or in combination with others

A demonstration at the end of Andrew Sieja’s closing keynote showed the speed with which documents could be made available to those who needed to make decisions about them. The point was emphasised further by an excellent video starring Chief Operating Officer  Nick Robertson which was in a different league from most corporate videos by senior executives – jokey and diffident whilst conveying a serious message about how legal advice on a single document quickly gives rise to a full-scale investigation, with the data, the teams and the workspaces assembled with a speed which matches the urgency of the event.

The meat of the day, so far as I was concerned, lay in the two panels which I took part in. Both were international in flavour.

The first was called International Update: issues in cross-border eDisclosure and data protection. David Horrigan of kCura moderated it, and the panel comprised Jonathan Maas of Maas Consulting, Clare Carroll of McCann FitzGerald and Meribeth Banaschik of EY. Our subjects included Brexit, preparations for the GDPR, the Privacy Shield and Schrems, and a range of other topics which affects those dealing with data which crosses borders. 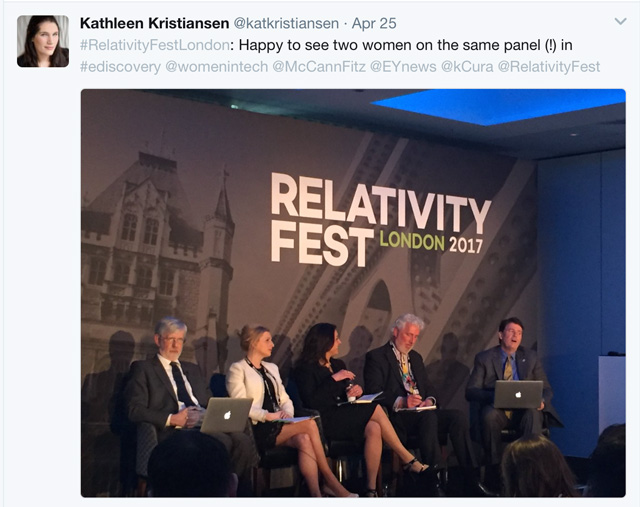 Apart from the fact that it overshadows everything at the moment, what has Brexit to do with the transit of data across borders?

Brexit and the UK’s future relationship with the EU is something which matters, I said. While the information Commissioner’s Office is doing sterling work to get us ready for the General Data Protection Regulation, it seems clear that David Davis, the Minister for Screwing Up Our Relationship with the EU, is as ignorant of this as he is of so much else. One of the many things which the government has overlooked in its rush for the Brexit cliff-edge is that the UK will revert to the status of a “third country” upon leaving the EU and must demonstrate the adequacy of its protections for data.

Clare Carroll, one of the apparently inexhaustible supply of eloquent lawyers from McCann FitzGerald, made it clear that while Ireland did not welcome Brexit, it was ready to take the opportunities which it presented as US corporations looked for another English-speaking jurisdiction versed in matters of discovery.

Meribeth Banaschik reported that there was growing activity in Germany as the GDPR drew closer. She said:

“Clients are, in essence, juggling about six balls of uncertainty in trying to navigate their way through e-discovery projects—and that’s not only Brexit, it’s the Trump administration, it’s model clauses, it’s the EU-US Privacy Shield, the Umbrella Agreement, the GDPR, and trying to make sense of all these issues.”

Jonathan Maas anticipated “quite a few high-profile victims who are not compliant in order to encourage everybody else to become compliant” and thought that “Perhaps for the first time in 10 years, IG will be taken seriously as the umbrella over all the data in an organisation”.

We can anticipate increased use of Subject Access Requests – the existing £10 fee may seem a trivial matter, but there is a psychological difference between having to pay a fee and not, and we can expect more people to make use of SARs. One is not supposed to use them as a fact-finding exercise ancillary to litigation but, in practice, there is little to stop someone exercising their rights to a SAR if they were adroit enough to appreciate the tactical value of forcing compliance.

Beyond that, the practical steps in dealing with cross-border data transfers will remain as before – take local advice, make an early start on investigating the data which you hold, put yourself in a position to open discussions with opponents and the US courts on an informed basis, and use the available technology to help get on top of it all.

The GDPR may prove to be the catalyst for information governance, providing an ROI which has hitherto been lacking. That said, anecdote suggests that many organisations seem to think that Brexit will get them off the GDPR hook – it will not, partly because the GDPR will take effect before the earliest possible date for Brexit, and partly because we need as a country to qualify as a safe home for data.

US and UK Discovery practice compared

My second panel was called eDisclosure / eDiscovery: the changing practice in England and Wales and the United States. The US was represented by US Magistrate Judge Andrew Peck, one of the few US judges to understand both the similarities and the differences between the two systems, and by moderator David Horrigan of kCura. The team for England and Wales was former Senior Master Steven Whitaker and me. 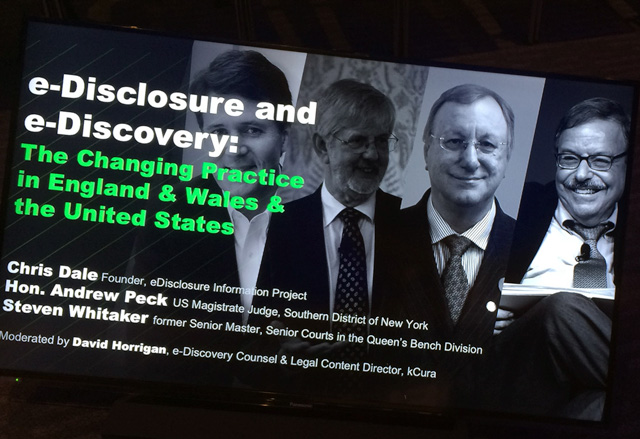 I have spent much of the last decade suggesting that the common law jurisdictions around the world had much to learn from each other in the development of rules and practice. It is not a race, of course, and it doesn’t really matter if one place got ideas from another or just happened upon them a bit later.

On proportionality, England and Wales led with practical enforcement of the rule that costs must be proportionate and that judges have a duty to manage cases proactively. Acceptance of these things take time: proportionality has long been expressed as a requirement in the US rules, but is only recently beginning to take hold; US judges are beginning to use their powers to control costs.

Meanwhile, the US judiciary, and most notably Judge Peck, have led the way in affirming that technology-assisted review or predictive coding (judgments / opinions differ in their terminology), properly used, was a proper way to identify potentially relevant documents; Ireland had followed, with England and Wales close behind. Steven Whitaker emphasised the importance of Pyrrho as an encouragement for judges to give their blessing to the proper use of predictive coding.

The importance of private information

I interviewed both Judge Peck and Steven Whitaker during the day, and the videos will be published shortly giving a fuller summary of the matters which we touched on in this panel. kCura’s David Horrigan has produced his usual pick of quotations from the show, including one from me about Mrs May’s shiny Brexit bus and its hasty rush for the cliff-edge.

Next up – Relativity Fest in Chicago

If kCura’s ambition is to make Relativity Fest London into a full-blown eDiscovery conference then they have succeeded. There was an inevitable focus on Relativity tools and partners in the technical sessions, but kCura is scrupulous to avoid product promotion in the subject-matter sessions.

The same is true at the main US Relativity Fest which this year takes place in Chicago between 22 and 25 October. There will be many pure technology sessions with an obvious focus on kCura and its growing list of partners. The sessions about the law, the practice and the procedure, however, will be product-neutral. On past form they will also be fun.

Picture of the Brexit panel by Kathleen Kristiansen of Millnet. Other pictures by Chris Dale and Will Dale.