Off to Legaltech New York for the eleventh time

Some of what I say here will be familiar to long-term readers, but it seems worth recapitulating my reasons for going to Legaltech (as we will all persist in calling it) and why it is interesting and important. Some pictures from past events appear at the end. If it seems egotistical to show ones of me, well, this piece is about why I go. There is a balancing non-egotism in the fact that none of them were by me.

I am off at the end of the week to Legaltech New York. It is now, apparently billed as “part of Legalweek, THE EXPERIENCE”, which, as Monica Bay points out in her article ALM renovates Legaltech New York, is likely to confuse those who may expect the event to take five or seven days. Believe me, three days is quite enough (although, as usual, I am arriving on Saturday and not coming back until Friday).

Monica Bay (right, at her ALM farewell party in 2015) gives a helpful summary in her article, and the organiser’s website helps explain the formal structure of Legaltech – keynotes, conference sessions, an exhibit hall across multiple floors, demos and many, many meetings, either prearranged or occurring by happy accident. There used to be a big round bench in the middle of the lobby, and one had only to sit there for a few moments before someone familiar passed by. When I first took my youngest son Will, we unpacked and I said “Right, let’s go and find some people”. “Don’t be silly”, he said, “You don’t just wander around New York hoping to bump into people you know”. He soon discovered that, in those few days, in that small block of streets, people that one knew were everywhere.

My account of the 2007 Legaltech is long on anecdote and short on analysis. It was not just my first Legaltech, it was my first visit to New York and, indeed, to the US, and there was a lot to take in.

Hitherto, my sole focus had been on the rules and procedure of England and Wales. Why did I feel it necessary to go to the US? Things have changed now (a bit) but the schedule of excuses offered by English lawyers for not considering IT for disclosure (as we call it in England and Wales for no good reason) included, curiously, the fact that it was “something Americans do, and what an expensive mess they make of it”. That was obvious bollocks as an excuse for not facing up to the rising costs of disclosure  but it seemed an assertion worth testing and Legaltech seemed to be the place to do it.

Although the UK lawyers’ “something Americans do” line was a poor excuse for not learning about eDiscovery / eDisclosure, it was not, I quickly discovered, a wholly unfair assertion. The then recent Zubulake case and the Amendments to the Federal Rules of Civil Procedure induced a level of fear among US litigants and their lawyers which they sought to assuage by buying technology, much in the way that primitive tribes buy lucky charms to ward off evil and bad magic.

Few stopped to consider what type of conduct was necessary to invoke court sanctions. There was more focus on buying tools than acquiring skills. A new cadre of eloquent and respected judges turned out patiently at the conferences to explain what was needed, but all anybody seemed to hear was “sanctions”. The more positive aspects of managing discovery efficiently hardly got a look in; no one stopped to ask the clients what they wanted. The upside was that a lot of extremely good technology was developed to meet the perceived threats, proving a very good basis for the tools we have today.

Then came recession – that dreadful Legaltech of 2009 when eDiscovery providers went down before our eyes and the bitingly cold weather outside was accompanied by a blizzard of CVs (résumé or resyoomay, the Americans say, though they spell it resume) as people scrabbled for jobs. The received wisdom was that clients were only interested in the lowest price, which led to an obvious conflict with the continuing fear of sanctions and the inevitably expensive work which went into countering that threat.

The years rolled on, with different subjects hogging the headlines. One year it was “the left”, that is, the left-hand, or information management end of the Electronic Discovery Reference Model, shortly to become “information governance” with a cool diagram of its own. “Predictive coding” discussion moved from “what is it” to “how to use it”. A handful of practitioners (Maura Grossman, then of Wachtel and now an independent consultant, being the most eloquent and the best-known) did not just talk about it but used it to win arguments, win cases and win clients; many others just talked about it. US Magistrate Judge Andrew Peck came to the fore as one of the few judges who really did understand the applications of this new technology, not just as a technical process but as a vital tool in the battle for the “just, speedy and inexpensive” requirement of Rule 1 of the Federal Rules of Civil Procedure.

The rest of us just waited, reckoning that predictive coding would become the norm as soon as something newer came along. And so it did, now that practical applications are being found for Artificial Intelligence. The old guard were forced back into their reserve trenches, expressing concern about judicial acceptability. The last two years have seen judgments in Ireland, England and Wales, and Australia which completed their rout. Last week, a new practice direction took effect in the High Court of Victoria. Practice Note SC GEN 5 Guidelines for the Use of Technology says that, in larger cases, technology-assisted review will “ordinarily be an accepted method of conducting a reasonable search”. On to battles new.

Big Data took its turn, along with the cloud, BYOD, the Internet of Things, audio discovery, mobile discovery, data visualisation and cyber risk. We heard of managed review and managed services. The balance of control between in-house counsel, external lawyers and eDiscovery providers changed with the years. Privacy and data protection was always there but now becomes central to anyone dealing with data outside the US. The word “proportionality” began to be heard and understood, at least by some. All of these topics warranted their prime time before becoming just another part of the problem and another range of ever-improving solutions.

Through all these years, Legaltech retained its essential features: if we see fewer big product launches these days, Legaltech remains the best place for a comparative tour of rival solutions to a problem which doesn’t go away. Big players rose, and in some cases fell with a crash. Most of us predicted consolidation among providers, but few of us foresaw the rise of new and nimble software players snapping at the heels of more established players. People I remember as keen but impoverished enthusiasts whose demo facilities consisted of a laptop in the corner of a cafe are now becoming significant players. Even if you were not interested in the technology, the rise and fall of the corporate players is fascinating, as is the resilience (and in some cases resurgence) of companies whose future was written off by rivals who wanted them to fail.

I go every year partly to catch all this, not just the hard news, the facts, and the legal and technological developments, but the straws in the wind, the gossip, and the barely detectable hints which turn into half-formed predictions in my mind. I ought really to write them on a dated scrap of paper and put them in a drawer, these guesses as to who is on the way up or down and how much of the rumour is just special pleading or kite-flying.

On Thursday, I am one of the panel members in kCura’s international panel called New Frontiers for International eDiscovery. Steve Couling of kCura moderates, and the other panel members are Karyn Harty of McCann Fitzgerald, Davin Teo of Alvarez & Marsal, and David Horrigan of kCura.

I have meetings, with sponsors or potential sponsors, with people I see only once a year at this event, with people I don’t know who sound interesting. As always, I have beaten off the many requests from people I have never heard of who seem to think that the summit of my ambition is to be locked away in a darkened room looking at demo screens. I can do that any time by setting up a demo at my desk. I can’t replicate the lively value I get out of being at Legaltech.

My son Will and I will, as usual, do as many video interviews as possible – there is a page here of past ones which give you the idea of what we try and achieve by them. The objective is not just to showcase a company’s software and services (although video is a good medium for that) but to find out what these people do and hear first hand what they consider to be important in the months ahead.

The hard part, so far as we are concerned, is lugging all the kit across the Atlantic and organising a schedule; everyone seems to want the same time-slots. The end-result is a stockpile of interesting talks which I can drip-feed into the blog in the subsequent months.

I am, as always, looking forward to it. One of my favourite moments, at one of my earliest Legaltechs, was a chap who hailed me in the Hilton lobby: “Hey! I know you – you’re the guy who writes that blog”. I am not much interested in all those viewer stats which marketing people obsess about, but to be hailed by a real reader whom I don’t know is a particular pleasure. 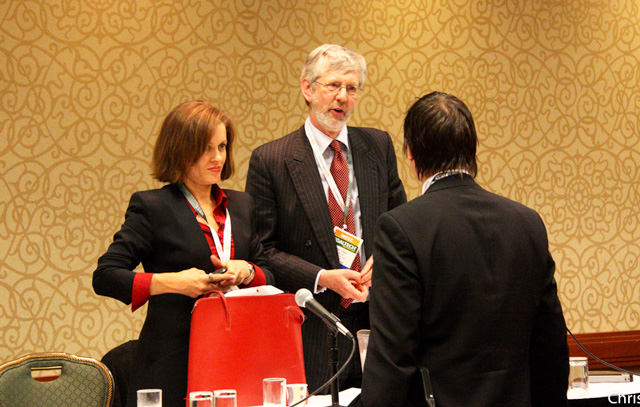 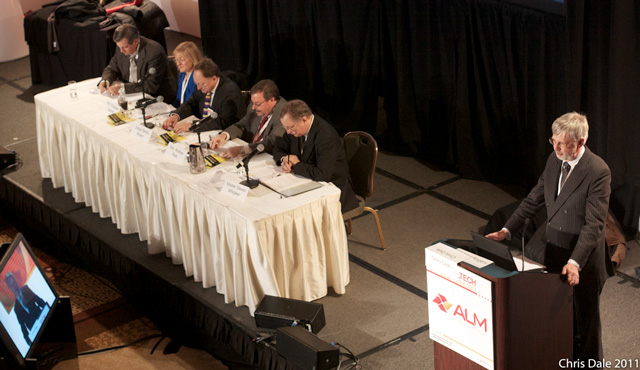 Corporate Counsel Roundtable 2015 – Bill Belt and Anne Kershaw at one end, me at the other, some of judiciary’s finest in between

I have been an English solicitor since 1980. I run the e-Disclosure Information Project which collects and comments on information about electronic disclosure / eDiscovery and related subjects in the UK, the US, AsiaPac and elsewhere
View all posts by Chris Dale →
This entry was posted in Discovery, eDisclosure, eDiscovery, Electronic disclosure, Legal Technology, Predictive Coding, Technology Assisted Review. Bookmark the permalink.