Photographs and their metadata help scuttle a shipping insurance claim

Gordon Exall, author of the authoritative Civil Litigation Brief, is always kind enough to draw my attention to judgments which involve any aspect of eDisclosure. Without his tip-off, I do not think that I would have followed up his recent blog post Proving things 34: there is no primer for scuttlers: when your ship doesn’t come in. The judgment in question, that of Mr Justice Teare in Kairos Shipping Ltd & Anor v Enka & Co LLC & Ors, runs to 316 paragraphs, and I don’t think I would have embarked upon it after midnight on a Sunday if Gordon Exall had not tipped me off about the photographic evidence.

I bang on a lot about the evidence (hold on to that word “evidence”) which is created daily by all of us, often without our realising it, through our interactions with social media and other web resources, and in the photographs taken by us or by others. One of my stock examples involves me taking photographs on my iPad of a potential balloon accident. 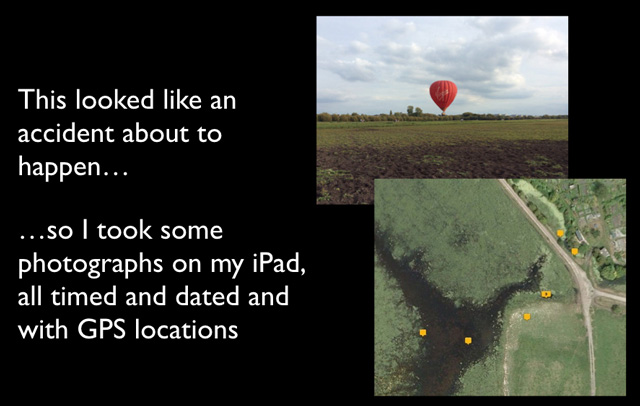 Because the iPad is GPS-enabled, my photographs show not only the time and date and the sequence of events, but exactly where I was standing when I took the photographs (the yellow dots on the aerial view). The hasty moves from place to place were prompted by a very real fear that the damn thing was about to come down on my head. Fortunately, there was no accident.

That conclusion – that there was no accident – was reached by Mr Justice Teare in what Gordon Exall calls “a comprehensive lesson in thorough fact-finding”. The judge’s decision that the ship had been deliberately scuttled relied in great part on photographs of the condition of the ship both before and during the incident which led to it ending up at the bottom of a very deep sea. If that location alone did not pose evidential difficulties, there was the added complication (as Gordon Exall describes it) that:

The only witnesses as to fact were employed by the claimant. Some of these (indeed most of these) could well be honest witnesses.

You do not need to read the whole of this the minute analysis in the judgment. You might do what I did and search for the word “photograph” and skip through the 144 hits which result. It is enough to understand the principle – that photographs were taken by more than one person, and that there were (how can one put this?) differing skill-levels applied to the the importance of the metadata, particularly as to timing.

Then there is this: the captain “instructed the master to collect all smart phones and cameras from the crew. The master did so. He understood that the owners did not want photographs uploaded onto websites”.

The motive for the collection of phones and cameras does not really matter, nor does the detail. What matters is that a significant commercial claim involved photographic metadata and that someone appreciated its significance.

As so often, I am obliged to Gordon Exall for drawing my attention to this. Anyone interested in civil litigation and in evidence, and interested also in professional duty and competence, should sign up for updates from the Civil Litigation Brief. If you are really up with this modern technology thing, you might want to join the 5,667 others who follow Gordon on Twitter where he trades as @CivilLitTweet.

I have been an English solicitor since 1980. I run the e-Disclosure Information Project which collects and comments on information about electronic disclosure / eDiscovery and related subjects in the UK, the US, AsiaPac and elsewhere
View all posts by Chris Dale →
This entry was posted in eDisclosure, eDiscovery, Electronic disclosure and tagged Gordon Exall. Bookmark the permalink.