Craig Ball reminds us on Facebook that it is two years since Browning Marean died. Although the eDiscovery industry is a fairly friendly place, I suspect that most of us would be forgotten within a month of turning up our toes. Not Browning. Here is Craig Ball’s warm appreciation.

To an Englishman, the highest praise you can give a man is to say that he is or was a “good bloke”. Browning was certainly a good bloke, but he was also an ambassador for his firm, his country and for eDiscovery, a man who imparted more knowledge (and, more importantly, wisdom) than anyone else in eDiscovery, and the man who gave so many (including me) their first leg-up in the industry.

One of my themes at the moment is how the various jurisdictions are beginning to respect each other more when it comes to eDiscovery. Browning did more than anyone to achieve this. Here’s what Craig Ball said on that subject:

Browning Marean was the world’s best known and most admired ambassador for e-discovery, the peripatetic mayor of our global village. No one traveled further, spoke more or put a better face on the American approach to the exchange of information in litigation than Browning. Lawyers around the world think Americans mad when it comes to civil discovery; but when they heard Browning speak, when they heard that mellifluous radio announcer voice, they thought better of us. And that was Browning in a nutshell: a wise, avuncular presence who just made you feel that everything would be all right. He touched my life for good, and I will miss him with all my heart. In that, I am far from alone.

In my article Goodbye old friend: Farewell to Browning Marean, I recounted how he gave me my first audience in the US:

He knew everyone, and everyone knew him. He went out of his way to introduce me to anyone he thought might be useful or interesting – most of them were both. At that 2008 LegalTech session, he did more than have me shake hands with individuals; he made me stand up and talk to a packed room. I was in the front row, my coat, camera, laptop and papers on my knees. Vince said something, and Browning said “I think Chris Dale may have a different view on that”, forcing me to dump all the clutter, stand up and turn to talk to the large audience. I was not best pleased at the time, I have to say, until I realised what he was doing – he wanted to give me the opportunity to be heard and to make myself known, something he has done for a generation of people who might not otherwise have come forward.

On the way out, a stranger said “I know who you are – you’re the guy who writes that blog”. If I can point to a moment when I raised my ambitions above my own jurisdictional patch, that was it. Browning did that for me, as he did for many others.

In a Cornish churchyard, I made a short video tribute on the day of Browning’s memorial service in Escondido. In the video (you will find it below), I picture Browning at some celestial bar, greeting old friends and making new ones. Among his friends on earth was our old Labrador Saxon, seen here with Browning in the Oxford University Parks in November 2010, along with my wife Mary Ann and George Socha. 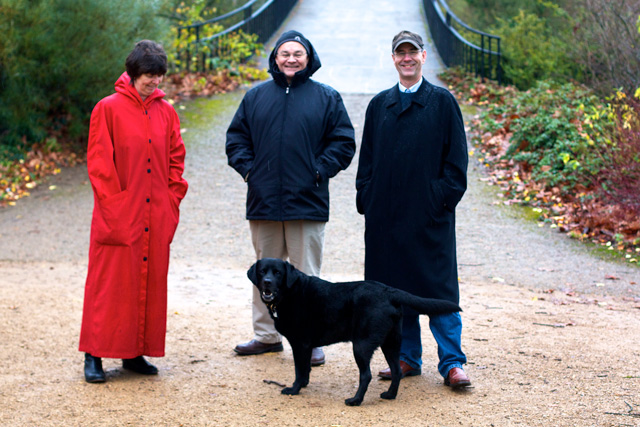 I remember talking to Browning about the shortness of a dog’s life, little dreaming that Saxon would actually outlive Browning.  Browning cast his mind back to his own family dog: “If half as many tears are shed for me as were shed for that dog, I will know that I was loved”.

You were, old friend, you were.

I have been an English solicitor since 1980. I run the e-Disclosure Information Project which collects and comments on information about electronic disclosure / eDiscovery and related subjects in the UK, the US, AsiaPac and elsewhere
View all posts by Chris Dale →
This entry was posted in Discovery, eDisclosure, eDiscovery and tagged Browning Marean, Craig Ball. Bookmark the permalink.