Read the documents and then decide their relevance. What – all of them?

An article in the Law Society Gazette is headed High Court backs predictive coding in first contested case. It is a report on the judgment which I mentioned briefly last week in which clients of BLP won the right to use predictive coding for the purposes of giving disclosure.

Unlike Pyrrho Investments v MWB Property (on which I have written and spoken exhaustively, indeed exhaustingly) this application was contested, with the other side presumably arguing either for manual page turning, or for the use of some different technology or, at least, against the use of predictive coding.

There is as yet not much to see in terms of the recent order, with neither the Law Society Gazette article nor BLP’s own article adding much to our knowledge.

As lawyers we like to see the documents, read them and then decide their relevance.

Before we start, let’s be clear about two things:

My tweeted observation was: 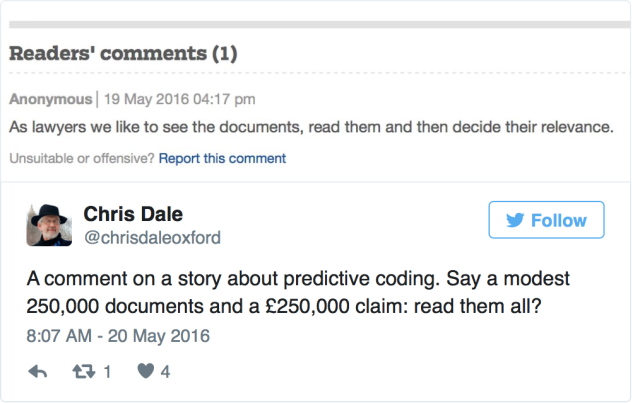 A rather one-sided Twitter debate followed – one-sided in that no one turned out to support the idea that every document could be read in a case of any size, however much this may appeal to a conscientious lawyer.

It is not necessarily right to preserve spur-of-the-moment tweets in the amber of a blog post, so I will summarise them:

It is easy to underestimate how many documents can be created in an apparently simple transaction, especially if it extends over several years. Many would be duplicates and if technology is used only to weed the duplicates and group the near-duplicates together, then that is a major saving.

The conscientious solicitor wanting to read everything (in a big case) has multiple tiers of questions: how many documents would be formally disclosable on the broadest interpretation of the lawyer’s duty and (a narrower question) how many of those will have any evidential value? All cases come down to very few issues and very few documents. More documents does not necessarily mean better justice and the English disclosure rules are driving parties to arbitration – “we need to get a grip” said one barrister.

I referred to the recent Court of Appeal case in which the court “could not even discern from the pleadings what the issues were”. A closer focus on the issues would lead to narrower pleadings which in turn leads to less disclosure and a quicker route to the handful of points and documents which matter. As it happens, that same point came up in the panel which I moderated last week on predictive coding. It was raised by US Magistrate Judge David Waxse as an issue in US proceedings; one way of reducing discovery, he said, was to be clear what issues it concerned.

[The Court of Appeal case was The Prudential Assurance Company Limited -v- Commissioners for Her Majesty’s Revenue and Customs. Gordon Exall has written about it here].

I digress. The tweets above can stand substitute for most of what I would say in answer to the comment on the assumption (I stress again) that the comment was intended to relate to the kind of cases to which the article referred.

I can quite understand those who sympathised with the Gazette comment as a statement of the ideal. I certainly don’t criticise the conscientiousness of lawyers who would like to read everything. We are forced into a practical, pragmatic approach which tempers the ideal with the brute reality that we cannot read it all. The technology is not a substitute for the exercise of a lawyer’s judgement, but an aid – an aid to the exercise of discrimination between the relevant and the irrelevant, and an aid to compliance with the rules, which requires the insertion of proportionality into the calculation of how much must be done.

I really do not care for their own sakes if the lawyers are working inefficiently, and it is not my business to suggest that some have practices which must inevitably lead to doom. I am, however, extremely interested in preserving disclosure as a source of evidence before the rule-makers decide to dispense with it and before the clients turn their backs on litigation. I am interested too in London’s role as a centre for dispute resolution, and not just for the very rich.

The rules, the cooperation required by the rules, and the discretion of the court, give ample opportunity to cut down disclosable information properly and thereby to reduce the time and cost of litigation. Technology helps that process. If we don’t use the rules and the technology for that purpose then litigation must inevitably decline, and at all levels.

I know nothing of the author of the comment. It may well be that he or she has a practice which allows the luxury of reading every document and making a viable business out of doing so. The part of the comment which I object to is its opening “As lawyers we like..”, purporting to tar the whole profession with this approach.

There are many who have appreciated that we cannot go on like this and have, at the least, taken the first step and seen some of this technology. If, having done so, you still reject it for your own use, then at least you will be able to engage in the conversation when your opponent suggests its use.