Challenges of email archive discovery – and some recent examples

Back in the summer, I wrote an article summarising the lessons from a Nuix webinar on email archives. Nuix has now created an infographic called The challenges of email archive discovery which you can find here together with a link to a Nuix information paper called eDiscovery best practices when dealing with email archives.

We have had one or two interesting stories arising from relatively recent emails in the last few days. My favourite ones are those extracted forcibly from the University of Oxford by a Freedom of Information request which flushed out how the University massaged its report on the impact of its hideous flats next to Port Meadow in Oxford. 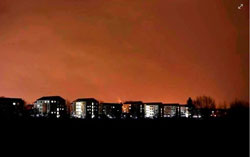 One email shows that a university official told a supposedly independent author of a formal environmental statement to remove a picture of the flats glowing in what had hitherto been darkness – “The night image is not helpful” she said. One can see why she thought this; why she thought it right to suppress it is a different matter.

Don’t even ask about the badgers btw.

Another one shows that an Oxford University official was dissatisfied with the low cost shown for the most serious level of remedial work, the so-called “one floor off” option; she was worried that the university would have to explain “why we are not pursuing Option 3 when the difference in cost between options 2 and 3 is ‘so small’”.

The figure was bumped up to £30 million, and this was what was published.

These are not stupid people; they knew they were under scrutiny, and they still left this obliging trail of evidence as to the modifications to this “independent” report.

Another recent example arose when a private hunting prosecution had to be abandoned because of the discovery that the expert witness for the prosecution was friends with members of the League Against Cruel Sports who were bringing the prosecution. The expert’s independence was open to challenge anyway, but there emerged a 2012 email in which he said that it would be “very damaging” if his friendship with the League’s head of enforcement was exposed. The prosecution was withdrawn mid-trial.

These are relatively recent emails whose unhelpful significance (or helpful if you are on the other side) was unnoticed by the custodians both at the time of creation and afterwards. How much more is lurking in very old email archives such as those described in my August article?

I am not, of course, urging people to seek out damaging emails and delete them. There are three stages which matter: the moment of creation, when the author might pause to consider what it would look like if produced (and perhaps question their own conduct in both the examples given above); the subsequent point (if there was one) at which they might properly have been deleted; and the moment when a case or argument was put forward which was likely to be weakened by the discovery of the offending document, when the lawyers ought to know of the weakness before they advised on the strategy.

Organisations ought to stress-test their archive retrieval systems, along with backups, cybersecurity defences and the rest. “Right, lawyers: I need everything we have got on the 2010 planning project by Friday”. Where is it? Who knows about it? Who has charge of it? What tools do we have we got / do we need for accessing it? How much will it cost to retrieve it all? How many days / weeks / months will it take?