US Magistrate Judge John Facciola has announced that he will retire later this year. The eDiscovery world will feel smaller without him. Those of us who believe in the efficient, just and competent management of electronic discovery will be sorry to see him go. Government agencies with broad unfocused discovery requests, and lawyers whose competence does not extend to 21st-century technology will perhaps be less sorry.

I first met him at a round table at the Willard Hotel in Washington in 2007. Quite apart from his invaluable contribution to the discovery discussion, he told us how, many years before, he had watched the wreckers’ ball rumbling up Pennsylvania Avenue on its way to demolish the hotel. A last-minute injunction had saved it. John Facciola is full of such stories; they and the good-humoured way in which he tells them, are the sweetness which make his often fairly sharp medicine go down as he lays into those parties and lawyers who could have made the whole process better but passed up the opportunity.

Judge Facciola’s 2009 speech at LegalTech in New York at which he laid into lawyers who were not competent to conduct eDiscovery in an electronic age.

I have told before how IQPC years ago asked for my recommendations for US judges for a panel in London. “Ask Judge Facciola and Judge Grimm” I said, much as one might suggest asking Pavarotti and Domingo to a local singalong. A few days later, IQPC sent me a message – “We have got them. What would you like to do with them?”

Patrick Burke, now at Reed Smith but then with Guidance Software, and I put together a panel involving those two American judicial stars, with HHJ Simon Brown QC and the then Senior Master Whitaker representing the UK. We did it more than once, and it went down very well. I used to write playlets, a form of light entertainment in which Judges sent up themselves and the system with pastiches of eDiscovery opinions and judgments. John Facciola played his parts with good humour and a light touch which might have surprised those who came before him in his court with extravagant demands or badly prepared eDiscovery arguments.

5 judges perform one of my eDiscovery playlets. Judge Facciola is 2nd left

I took part in two events in his company at the tail end of last year, one at the ASU Arkfeld event in Arizona and one with UBIC in Washington. At both of them he combined wisdom withhumour, the velvet glove of mirth masking the iron fist of criticism for those who couldn’t be bothered to get it right – to read the rules, to understand the cases, to get their heads roun 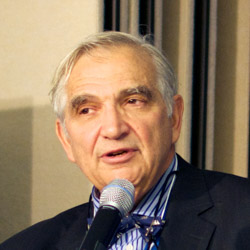 d the technology, and to cooperate. Here’s a link to my report of the UBIC event, much of which is taken up with my account of Judge Facciola’s talk.

I understand that John Facciola will continue to give us the benefit of his wisdom outside the court. I wish him a long and happy retirement and I hope that US discovery practice will live up to the ideals which he set out.

I have been an English solicitor since 1980. I run the e-Disclosure Information Project which collects and comments on information about electronic disclosure / eDiscovery and related subjects in the UK, the US, AsiaPac and elsewhere
View all posts by Chris Dale →
This entry was posted in Discovery, eDiscovery and tagged Judge Facciola. Bookmark the permalink.