This is the third of three posts in which I tell of a trip to Nashville and Chicago in October with my son William. I took part in events or meetings with the three companies named in my title – Huron Legal, kCura and Cicayda. The first part of this three-part post is here and the second is here. This one covers Chicago, where I spoke about predictive coding at Relativity Fest and had a meeting with Huron Legal. We also saw something of Chicago and ate at the Purple Pig. 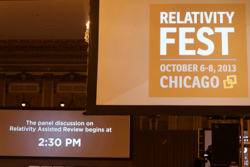 Relativity Fest is a large annual gathering of Relativity resellers, users and would-be users who assemble in Chicago each year for a mixture of hands-on training, a glimpse of new developments and road maps, and a solid series of educational talks and sessions which are either about the use of Relativity or about the context in which it is used. I was there to take part in the predictive coding panel which closed the conference.

I try and avoid doing closing sessions if possible; many delegates seem to deduct them automatically from their schedule, heading for the airport whilst hapless speakers talk to empty rooms. My heart sank even further when I discovered that the venue was one of those vast ballrooms in which the stage is barely visible on the horizon, compensated for, if that is the right expression, by the projection of each speaker’s face on a giant screen. I needn’t have worried – the room was packed.

My fellow speakers were Dr. David Grossman of IIT and Georgetown, Emma Kettleton of Millnet, Marty Mazzone of Fidelity and Warren Rosborough of McDermott Will & Emery. The moderator was Constantine Pappas of kCura.

With others there to give the perspective of the lawyer, the provider and the statistician, I was free to talk on wider points. As I had in Nashville, I extracted from Judge Peck’s opinion in Da Silva Moore not the stuff about predictive coding but the messages about perfection, cooperation and proportionality.

I sneered, lightly, at the way in which US lawyers scarcely dare breathe unless some judge, in some state, in some case, had provided apparent authority for it. Why wait for a judge?, I asked; it is not as if judicial qualification bestows any great experience in using eDiscovery technology. You are the ones in charge of deciding both the scope of discovery and the method, I said, and the key lies in the ability to articulate why your approach was right, rather than in slavish adherence to apparent precedent. The judge in the Hooters case was referred to as if he had said “you must use predictive coding”. What he was actually doing was inviting the parties to come up with the best way of tackling the problem. That is in fact what is required in most jurisdictions, including the US, but few in any jurisdiction have grasped that yet or equipped themselves to make the arguments in an informed way.

If I report nothing of what the other speakers said, that is because of a technical curiosity which meant that none of us on the platform could hear anything said by the others, including the moderator. I knew it was my turn to speak only because Constantine Pappas turned towards me with a welcoming gesture. The movie will be available soon no doubt, and we can all find out what we said. It seemed to go down well, anyway.

I would have liked to have seen more of Relativity Fest. There was a good spirit in the air, and the gossip (that is, what I picked up in the corridors and elevators) was positive, particularly about the quality of the sessions. I will go again, hoping to do more than parachute in and do my bit as the show is closing.

I was privileged to be invited to dinner at his club that night by Circuit Judge Mark Drummond,  of the County of Adams, Illinois, to whom I had been introduced by HHJ Simon Brown QC of the Birmingham Mercantile Court – they had met at an advocacy course in Tasmania at which they were both speakers. Apart from an interesting evening’s conversation and anecdote (going far beyond advocacy and eDiscovery), and the best meal I have had in the US, I got from Judge Drummond some tips about what to do – and, specifically, where to eat – in Chicago. 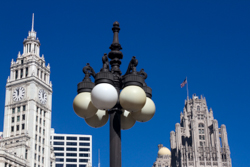 William and I had the next day free, and we spent it walking round Chicago on a beautiful day. This is a city to which I will return, partly for its architecture, and partly for lunch at the Purple Pig, which Judge Drummond had strongly recommended. “American cuisine” is something of a misnomer, largely thanks to the fact that, outside the most confident of restaurants, everything tastes of salt – I sent one restaurant meal back on that ground and the replacement dish, salt-free, tasted of nothing. At the Purple Pig, in contrast, every mouthful of was delicious. Just go.

My last engagement was with the leadership team of Huron Legal, swapping the relative informality of Cicayda and kCura for a more formal gathering round a boardroom table at dawn.

I was given no particular agenda – just a two hour slot to talk to and with some of the most influential people in electronic discovery and law firm and law department management. I like doing this sort of thing because it forces me to collect together the issues and trends which seem of importance and to test that against the knowledge of people who are involved daily in working with law firms. Huron Legal does plenty of that.

It is also an opportunity to get to know better what my sponsors do, what skills and tools they have and what initiatives they are planning. 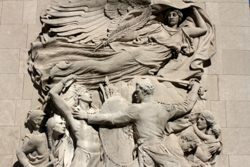 For a trip which I had not intended to make, this was interesting, useful and a pleasure. I saw two interesting cities, caught up with some old friends, met some new people and traded views and information with a wide range of players in the industry on which I comment.

There are some more photographs of Nashville and Chicago here.

I have been an English solicitor since 1980. I run the e-Disclosure Information Project which collects and comments on information about electronic disclosure / eDiscovery and related subjects in the UK, the US, AsiaPac and elsewhere
View all posts by Chris Dale →
This entry was posted in Cicayda, Discovery, eDisclosure, eDiscovery, Electronic disclosure, Huron Legal, KCura. Bookmark the permalink.