So, what is the overall effect of the implementation of the new Civil Procedure Rules in so far as they relate to case management, eDisclosure and budgets? Oh, I was hoping that you would tell me.

During last week, I started writing a parody, equating judicial reactions to dangerous modern concepts like budgetary control to the reaction of the peers, known as the “Backwoodsmen”, who showed no interest in the legislative process until Lloyd George threatened their very existence in the second General Election of 1910. At that point, they turned up at Westminster in their ancient tweeds, promising to “die in the last ditch” (thus their alternate name, the “Ditchers”) to defend the old ways. Tom Lehrer famously said that satire became obsolete when Henry Kissinger was awarded the Nobel peace prize. I now feel much the same about writing a parody about judicial reactions to modern commercial practices.

Someone yesterday said on Twitter that she had been embarrassed about her inability to understand it all until she realised that everyone else was similarly at a loss.

Put briefly, the long awaited Jackson reforms, whose outline has been known for nearly two years, did not go before Parliament until last week, when they were approved. They take effect on 1 April. One amendment had been agreed even before that approval, relating to costs incurred prior to the new regime. What emerged this week was evidence of a judicial rebellion resulting in agreement “on further reflection” to exempt the Chancery Division, the Technology and Construction Court and the Mercantile Courts from the strict budget obligations, an exemption which applied already to the Commercial Court and the Admiralty Court. It appears that their Lordships in the other divisions were worried that they might lose business to the exempt courts. The whole thing was rather reminiscent of the way in which one supermarket chain objects to the grant of planning permission to another on grounds which are dressed up as being objective but which amount to a kind of protectionism.

I will write more fully about all this when the dust has settled. For the moment, those who are interested might like to run their eyes over the following:

The amending legislation itself

A much more comprehensive article by Kerry Underwood called Costs Management Orders Including the new CPR which, like my article, predates the latest developments

A note (its formal status is unclear and it is just called “this document” signed by the President of the Queen’s Bench Division and the Chancellor of the High Court setting out, and purporting to explain, the extent of the backtracking. 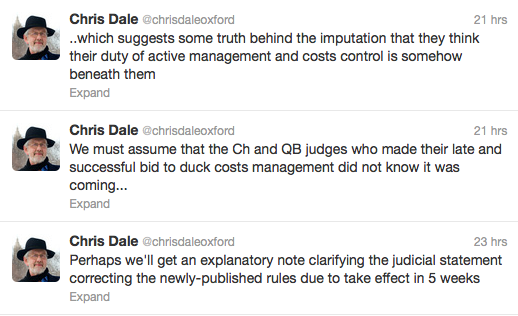 The problem, apart from the overriding sense of utter shambles, is that amending statutes can be confusing enough with their necessary cross-references, removals, additions and replacements. The “document” with its extended exemptions, its side-reference to a £2 million ceiling which appears (don’t ask me) either to claw back part of the exemption or to qualify the original position (I assume in fact that it relates to the surviving cases in the QBD), and its conclusion that “it is envisaged that costs management orders would be made in all cases except where there is good reason not to do so” leaves me unwilling to express a definitive view on what applies where.

Let’s be clear on this though:

There is no change to the provisions relating to pre-CMC exchange of information, and about attempts to reach agreement on the scope and on the method of giving disclosure.

These include an obligation to estimate the costs of disclosure – it is not clear whether their Lordships overlooked this in their scrabble to be relieved of budgetary considerations, but I see nothing in the amending “document” which affects this.

We can expect to see strict enforcement of the obligations – so far as I can see, the judges have no room to wriggle on this. As it happens, I am not in favour of over-strict enforcement of these provisions, recognising that many will face genuine difficulty in the first few months. That, however, is what the rules say, and a judge really has no alternative but to take a strict line.

Being objective about this, the judges are not the only ones with doubts about budgets. Many lawyers involved in big commercial cases think them irrelevant and others appeared to accept that the whole idea is beyond them. Well, if they can work out which cases, at what level of claim, can properly be taken to which Division, then they can duck that part of the problem for the moment. I do not myself see what is so special about litigation that it should be exempt from the normal principles of commercial risk assessment, but the Ditchers and Backwoodsmen have carried the day for the moment. Let’s see what happens as we spend another two years trying to take a proper stab at the subject. With any luck, we will see some key retirements over that period.

As always, I am more interested in the benefits rather than the burdens. Clients will like the idea that costs are being controlled, not least the costs of opponents which they might themselves have to pick up one day. Lawyers who can show that they are on top of budgets and metrics put themselves in a position both to win clients and to impress their opponents into settlement by their grip of the new rules, their understanding of the implications, and their knowledge of the “tools and techniques” (as Practice Direction 31B puts it).

As I say, I will write more about this in due course.

I have been an English solicitor since 1980. I run the e-Disclosure Information Project which collects and comments on information about electronic disclosure / eDiscovery and related subjects in the UK, the US, AsiaPac and elsewhere
View all posts by Chris Dale →
This entry was posted in Court Rules, CPR, Discovery, eDisclosure, eDiscovery, Electronic disclosure, Jackson Reforms, Litigation. Bookmark the permalink.