Nigel Murray, managing director of Huron Legal in London, is limbering up for his annual bike ride to raise money for Help for Heroes.

This year the ride is across the Great War battlefields of north-eastern France.  It involves 375 miles in five days, no mean feat for a man of a certain age whose posterior is more used to a comfortable seat at a desk, in an aeroplane or in a restaurant, and who can often be found with a beer, a cigarette or both in his hands.

Nigel has raised over £15,000 over the three years in which he has done this ride. This year he is to be joined by a team from Huron’s London office – a fine instance of leadership by example. 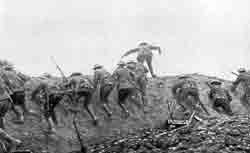 I used the expression “over the top” in my heading for a reason. It has come to be associated with divas having hissy fits, with the extravagance of some electronic discovery or with the faux outrage of the Daily Mail as it incites its readers to get worked up over some triviality. The expression in fact derives from those same trenches which the Help for Heroes cyclists will see as they cross France.  Nothing one can imagine could equal the terror one would feel, and the courage one would need, waiting in a trench for the dawn whistle which was the signal to climb over the parapet and out into the shelling, machine-gun fire and barbed wire which lay over the top – officers and men in the shared democracy of death and injury.

That war preceded the discovery of penicillin, one of the reasons why so many survived injuries in later wars.  Survival, however, often meant living with terrible injuries. Nigel makes the point that battlefield rescue teams and medical science continue to make survivors of men and women who, until relatively recently, must surely have died from their injuries. While we continue to send young people to war on our behalf, and whatever we may think as individuals of the decisions which took us into the wars, we owe a duty to those who return with these terrible injuries.

You can support Nigel’s efforts by completing a simple form on his sponsorship page. The Help for Heroes website explains what they have done with the money raised to date and what they plan to do. There is a page dedicated to the 2012 Big Battlefield Bike Ride which includes a link to the itinerary.

I realise, incidentally, that I have sub-consciously used another term which has passed into the language with a meaning derived from a lost military usage. A limber was the two-wheeled ammunition box which sat between the gun-carriage and the horses or vehicle which pulled it, and to limber up was to assemble the three components for movement. The term became associated with any form of readiness. By chance, limber has another relevant derivation – it is an adjective meaning flexible, lithe or nimble, which is what we expect to see when Nigel returns from his ride.

I have been an English solicitor since 1980. I run the e-Disclosure Information Project which collects and comments on information about electronic disclosure / eDiscovery and related subjects in the UK, the US, AsiaPac and elsewhere
View all posts by Chris Dale →
This entry was posted in Discovery, eDisclosure, eDiscovery, Electronic disclosure, Huron Legal. Bookmark the permalink.