It is Friday night as I start writing this. I am in BA’s lounge at Washington Dulles Airport after the two-day Georgetown Advanced eDiscovery Institute. There I took part in an international panel, talked and/or listened to the Who’s Who of US ediscovery including a dozen judges, and heard much that was thoughtful and interesting. Comparisons with the UK were inevitable, both those which were expressed in the sessions and those which crossed my mind as I talked and listened. No one is keeping the score, but I think we ended up about even.

rst. The week began with a conference in London, the Thomson Reuters 6th Annual eDisclosure Forum co-chaired by Browning Marean of DLA Piper US, George Socha and me. Three of us took part in panels at both conferences – Browning Marean, Laura Kibbe of Epiq Systems and me. As you will see from my report of Georgetown, there is increasing crossover between the US and the UK in relation to electronic disclosure / discovery. This may seem obvious – we are all facing the same problems, and suppliers like Epiq are active in both – but the gap is narrowing as we move from dismissal of each other’s approach to a greater willingness to listen to what is being said on the other side of the Atlantic.

The speakers included Senior Master Whitaker, HHJ Simon Brown QC, Mark Surguy of Pinsent Masons, Vince Neicho of Allen & Overy, Laura Kibbe and Deborah Blaxell of Epiq Systems, Ted O’Neil of EMC Kazeon, Bill Onwusah and Matt Davis of Hogan Lovells, Anne Marie Gibbs of Daegis, Jeremy Marshall of Irwin Mitchell and Simon Clark of Pfizer. The audience included several in-house litigation support managers, some suppliers, and lawyers from firms and government, many of them introduced from in-house sessions which I do around the country. My role is to introduce all these players to each other, and in opening the conference I began by asking the audience members to speak to someone whom they did not know. The resulting hubbub was gratifying, and I will do this again. 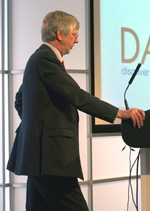 I merged my first two sessions, on the Practice Direction and on the Judicial Perspectives, into a single session with Senior Master Whitaker, HHJ Simon Brown QC, Vince Neicho of Allen & Overy and Mark Surguy of Pinsent Masons. Other sessions covered preservation and collection, technology developments, some lessons from the cases, and costs management.

The Practice Direction and Questionnaire and Master Whitaker’s judgment in Goodale v Ministry of Justice cross-cut into all these topics, a point which I reiterated during the day. The PD and Questionnaire together provide a map. Goodale gives encouragement both to an approach which starts from the most important documents and works outwards from there. It is no coincidence that Master Whitaker is both the author of Goodale and the leader of the working party which drafted the Practice Direction.

There is more to collection than the technical mechanics. Judge Brown’s judgment in Earles v Barclays Bank shows the importance of the intellectual, as opposed to the merely technical, component in collection decisions. Before technical skill tells us how to collect, we need a thoughtful and co-operative approach to deciding what must be collected, and regular litigants need a process, a standard approach to the court’s requirements.

Earles tells us (Para 21: “potential litigants…need to anticipate having to give disclosure of specifically relevant electronic documentation and the means of doing so efficiently and effectively”) that we must have systems in place for identifying data, and Goodale (Para 27 “…software that providers now have, which can de-duplicate that material and render it down to a more sensible size and search it by computer to produce a manageable corpus for human review”) emphasises the role of technology in culling the volumes down to reasonable amounts for review. Laura Kibbe of Epiq Systems and Ted O’Neil of EMC/Kazeon helped us through the technology developments, again emphasising that you do not just throw technological wonders at the problem – they are an aid to an intellectual preparation which begins with old-fashioned lawyerly attention.

The cases of the last 18 months or so should be enough to encourage litigation lawyers to apply their minds to this subject. The key cases are summarised here, and reading them might, as the programme put it, “suggest how one might avoid becoming the next object lesson in how not to do it”. As Master Whitaker put it in the first session, many e-disclosure defects fall squarely under the heading “negligence” – not just carelessness, not merely choosing the least efficient way of doing things, not just incurring unnecessary costs, but negligence.

Perhaps the most interesting session, in many ways, was the one on costs management. Jeremy Marshall of Irwin Mitchell was strong on the need to give clients an estimate of the costs likely to be incurred, to involve them in discussion about the unknowns and variables, and to keep them involved. The unacceptable bills are the unexpected ones which bear no relation to the initial budget. Laura Kibbe of Epiq and Ann Marie Gibbs of Daegis emphasised the role of technology in this; there is, of course, a cost involved in getting the documents into the system, but the benefits which ensue include the ability to recycle that information as the case progresses, and to use it as a source for costs-prediction and decision-making. I gave the example of being able to see the effect of including or excluding certain keywords – many of these applications show you pretty well instantly what the effect will be on the size of the reviewable document populations. That, of course, brings us back to what Master Whitaker said in Goodale.

For the closing sess

ion I moderated what we called a Risk-Benefit summary, described in the programme as “a lively moderated discussion that brings together all faculty, vendors and audience members”. These sessions have the potential to fall flat, with everyone thinking about their drinks and trains. In the event we ran right to the end of our allotted time with the questions still flowing.

I summarised the risks which we had heard about during the day including, in no particular order:

One obvious corollary of this list is the possibility of avoiding all these risks – not suffering costs penalties, not being negligent, not being named in adverse circumstances in a judgment. One can, however, be yet more positive than this. There will be winners as well as losers in the shake-up of law firms. If much litigation is optional, much is not and there is a growing amount of regulatory pressure, need for internal investigations, and for employment-related investigations, to say nothing of work derived from the US which UK firms have been slow to grasp.

Some of this will inevitably go to the very biggest firms because of their specialist skills, but there is a growing place for second- and third-tier firms who are agile and alert to the fact that they can ally themselves with exactly the same technology as the big firms use. Smaller firms have always been able to hire top-flight barristers to help them take on the work which is outside their own range; why not do the same with technology? If clients take some of the work in-house, they will still need the help of lawyers, and the ones they will go for will be those who can fit their into the clients’ processes. This brings the opportunity of high-value input which does not depend on large in-house resources but on skills. The encouraging thing about this conference was that the lawyers present included representatives from these mid-ranking firms. In the coming battle for market share, it is these firms who stand to win most.

I closed the conference by thanking those who made the event possible – Thomson Reuters, my co-chairs, the two judges and the other speakers, and the vendors whose support makes it possible to hold events like this. I am grateful too for an audience which provided lively discussion, both between themselves and with the faculty and sponsors which, so far as I am concerned, is the main point of these events. Please do get in touch, either for discussion with me or for an introduction to anyone else who was present, particularly at the vendors. I do not do system selection or make recommendations, but I am happy to provide direct links to the right people if you are already interested in a named provider.

Perhaps the most interesting observation of the entire day came from Judge Brown. The context was judicial training, for which there are few resources. As law firms are increasing the amount of in-house training which they give on this subject, why not invite a judge to take part? Three days later at Georgetown, someone made exactly the same suggestion to US law firms.

Nick Patience of The 451 Group wrote up the conference here.

I have been an English solicitor since 1980. I run the e-Disclosure Information Project which collects and comments on information about electronic disclosure / eDiscovery and related subjects in the UK, the US, AsiaPac and elsewhere
View all posts by Chris Dale →
This entry was posted in Discovery, E-Discovery Suppliers, eDisclosure, eDiscovery, Electronic disclosure, EMC, Epiq Systems, Litigation, Litigation Support, Thomson Reuters. Bookmark the permalink.