The InnoXcell eDiscovery Exchange Platform in Singapore seems months ago, though I have in fact been back for only a fortnight. I wrote briefly about it then (A quick ediscovery trip to Singapore)  and promised a round-up of the sessions. I will keep it brief – the primary purpose is to show the commonality between jurisdictions, on which I have said a fair amount recently anyway.

Why do I go to these far-flung places? It is certainly not for the tourism – I was in transit to and from Singapore for as long as I was there, and did not get more than one block from the hotel. It was not just to meet up with old friends – most of the people I saw there are people I have seen elsewhere recently and will see again at LegalTech in February. I have heard quite enough of my own voice recently and do not need to cross the world to hear more. I do not really need any more air miles. Have you ever tried to spend BA’s air miles? The system is cunningly weighted to ensure that only those with infinite leisure and complete indifference as to their destination can ever make use of them. Whilst I appreciate the access to lounges, the ability to jump queues and the occasional upgrade, these things are only of value if you travel a lot anyway, and that gets us no closer to providing a motivation for going.

The primary reason is to try and influence and catch thinking (and in particular the judicial thinking) in those countries which require discovery of documents as a central component of the evidence needed in litigation. This is not a matter of boasting about what we are doing in the UK – we will see how it works in practice before we do that – but sharing approaches to both the problems and solutions. Travel is not just a matter of missionary zeal (although there is an element of that) but is ultimately focused on the messages for our own Civil Procedure Rule Committee.

The UK contingent in Singapore included three of us who were involved in the drafting of the UK’s new e-Disclosure Practice Direction and Electronic Documents Questionnaire – Senior Master Whitaker, Vince Neicho of Allen & Overy and me. Singapore’s equivalent Practice Direction 3/2009 has been in force for a little over a year. There is a circle here, since the Singapore PD was influenced by a wide range of existing sources, including our then PD. Senior Assistant Registrar Yeong Zee Kin, in his keynote speech, gave us a recap of the purpose and deliberately steady progress being made with it. The key lies in active management of those cases which warrant it and in developing a consistent approach so that parties know what to expect.

I moderated a rules and procedure panel with Master Whitaker, Yeoung Zee Kin SAR, Eddie Sheehy of Nuix and Vince Neicho – two Britons, one Singaporean and one Australian or, if you shuffle the pack differently, two judges, one litigation support manager and a software provider. We discussed common themes arising in different jurisdictions, the UK practice direction, some UK cases, the electronic documents questionnaire in the context of transparency and cooperation, and the importance of putting thoughtfulness and client objectives into the mix along with rules and technology. There was little that was specifically Singaporean about it, and that is the point – the discussion would have been more or less identical in any jurisdiction.

Ronni Solomon of King & Spalding gave us an overview of the US Federal Rules of Civil Procedure relating to electronically-stored information, including a section on sanctions. The selection was cleverly made to include those with a universal relevance rather than being a mere recital of where the US stands today. 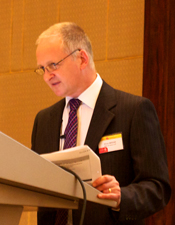 Vince Neicho of Allen & Overy was good, as always, on the law firms’ perspective. He was always puzzled, he said, by those who are not sure if they needed to “use e-disclosure”. Even where it is not necessary to disclose documents to an opponent or an authority, you still need to find your way around them, and the ability to store, search, transfer, and sort material makes electronic data much easier to handle than paper. Records management, he said, used to involve “an old man down the corridor in a brown coat”; now it was a boardroom matter, and document management had become risk management. There is inevitably an upfront cost, but the most expensive thing we can do is nothing.

Out of Vince’s good illustrations and examples, I pick what he said about the value of cooperative interaction between law firms even in a contentious matter. Whilst the word “collaborate” included amongst its definitions “to cooperate treasonably”, the definition relevant in this context was “to work together in a joint intellectual endeavour”. Such cooperation is not a sign of weakness but a strength, particularly when you cannot agree on some aspects of disclosure and need the court to help; discussions bring an understanding of the opponent’s position which can minimise the scope for diametrically opposed views.

Craig Carpenter, VP and General Counsel at Recommind gave us an overview of technology developments in advanced analytics, automated review, and predictive coding; on the business side he talked about moves towards bringing ediscovery in-house and alternative fee arrangements. A history of money wasted on poor results had caused enterprises to become more aggressive, by taking the work in-house or requiring cost predictability and the use of technology. Clients increasingly want to share the risk, which historically had fallen entirely on them; law firms had to become more efficient if they were at risk of shouldering any budget over-runs or of losing much of the work to their clients. There was no alternative but to develop business processes which include the use of technology.

This subject came up again on the second day when I moderated a panel consisting of Eddie Sheehy of Nuix, Dmitri Hubbard of Epiq Systems, Scott Warren of Kroll OnTrack and Recommind’s Craig Carpenter again. This was a pretty starry panel – when did you see senior people from these four companies all on the same panel? Although predictive coding was not our only subject, it proved to be the principal one, and one which raised some questions from the audience at two levels – getting their minds around the concepts and accepting that any form of automated review is to be relied upon. Epiq’s Dmitri Hubbard is particularly good at easily-understood parallels – the ability to reduce difficult technical subjects to easily-understood concepts without patronising the audience is an enviable skill which would be worth bottling for wider distribution. As always I was too busy teeing up the next question to note down what he said.

The panel dealt well with the audience’s doubts about reliance on automated review. Any good software of this kind (and there are several examples) provides the ability to take samples of documents included as a result of its processes and of those left out. It would be surprising if one did not sample the output quite aggressively on the first pass at it, but one grows in confidence both on a particular job and when you come to use it again. One must take samples of manually-reviewed documents in the same way; a major difference with a software selection is that you can re-run the processes immediately to take account of any corrections which arise as a result of the sampling. It is hard to do that economically with a manual review.

I was asked to close the conference. Fortunately, no one wants big speeches at the end of two thought-filled days, so I gave them some bullet points instead, some of which may be worth setting out here:

I am never sure, incidentally, whether to attribute the latter quotation to US Magistrate Judge David Waxse or US Magistrate Judge Andrew Peck. It encapsulates very well the point which Vince Neicho made about the merits of cooperating on the mechanics of discovery however fiercely you fight on the issues.

This was a good conference in a jurisdiction which is growing in importance. Singapore’s aggressive commercial outlook is backed by judges who are aware of the importance of a litigation system which is simultaneously thorough, fair and economic to use. Electronic discovery is only one component in that, but it is one which cannot be ignored. It is not being ignored in Singapore.

Photographs by Jeffrey Teh of InnoXcell and Chris Dale