How was ILTA for you?

There are two halves to the question “How was ILTA for you?”. One is the personal reaction. Did I learn something and see some interesting technology? Did I meet interesting people? Did I have fun? The answer to all these questions is Yes, as I expected. The more serious question concerns the state of the industry, by which I mean the lawyers who are involved in e-discovery for litigation and regulation and their clients as well as those who provide software and services to them. Let’s take the easy bit first.

I am luckier than most at ILTA. I have no responsibilities apart from talking to pleasant people about a subject in which I am interested. I have no stands to put up and man; I do not have to do any hard selling or make any buying decisions; such formal meetings as I have are a pleasure rather than a burden; I do not have projects running back in the office and anxious clients to keep contact with; I have no staff to be responsible for nor is anyone responsible for me. My sole “duty” is to see people I know and like, to meet people I do not know, and to write about some of it afterwards.

On that basis, I am easily pleased. The venue was just fine, the organisation impeccable, the sessions and booths interesting, and I was in conversation with agreeable people from arrival to departure except when I chose to sit quietly writing. A lawyer from the US, the UK, or anywhere else where documents are collected for civil proceedings could have informed him or herself at any level – those new to the subject get a gentle immersion which they can take at their own pace, whether in sessions, by going round the stands or by just talking to others; those who want a higher level of learning, technology or discussion can easily find it.

Numbers were down, but 875 delegates from law firms, industry or government is not an insignificant number. Everyone who came was there for a purpose, since their partners or employers would hardly send them away for a week in a smart hotel just so that they could kick tyres and have a good time. The level of real interest was potentially more concentrated than one gets in more prosperous years.

As usual, ILTA was the trigger for some product launches and announcements. Autonomy announced several law firm competitive conversions and new deals following the integration with iManage. FTI launched RingTail QuickCull; Anacomp launched new Early Case Assessment services hot on the heels of its strategic alliance with Nuix; Equivio were showing their new Equivio>Relevance; Dominic Jaar of Canada’s Ledjit Consulting was there on the first public outing since the announcement of Ledjit’s strategic alliance with Guidance Software;  Clearwell had just added new pre-processing, production and review capabilities to its Version 5.0;  I spoke to Stratify , CT Summation, Wave Software, Recommind, CaseCentral, and CommVault amongst others (I stress the “amongst others” bit here – failure to mention anyone else is a indicator that I had a busy time, not a slight). Old English faces (as in people from England whom I have known for a long time) included Liam Flanagan of Tikit, Charles Christian of Legal Technology Insider and Richard Susskind (I say “English” but this actually sounds like one of those jokes begining “An Irishman, an Englishman and a Scotsman walked into a bar…”).

There is a heap of good stuff between all these providers. I make the point I have made before – a prospective buyer of applications and services could wrap up a lot of learning and understanding in a quick trip to ILTA or LegalTech by a mixture of attending sessions, seeing demonstrations, and just chatting in the bars and corridors.

We need to get more UK lawyers there. It is on my list of ambitions to persuade UK lawyers that the gulf between their practice and that of their US counterparts is less great than appears. I spoke to people from smaller US firms whose experience and level of knowledge was much the same as that in similarly-sized firms in the UK. Whilst much of what was said in the sessions was US-specific, much of it was universal; the main topic which I have taken away and written about – staffing the industry as we come out of recession – is one of those universal topics. The discussions about competence – not just FRCP competence but general litigation competence in the electronic age – depends on the same basic principles on both sides of the Atlantic. 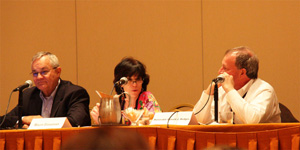 There is a chicken and egg element here, or there will be as the economy improves – if ILTA expected more UK delegates then the content would widen, at least into crossover subjects; if there was more international content then perhaps more UK people would come. This, as with so much else, is something which will vary with the economy

What about the industry as a whole? I came across, directly or by report, every shade of opinion as to whether we were going up, going down or bumping along the bottom. There is no sense in trying to average the responses which I got in an attempt to arrive at a representative opinion.

The impossibility of arriving at an average view is illustrated by the story of the two statisticians who went hunting. The first raised his gun and fired at the deer – five feet to the left. The second did the same – five feet to the right. “We got it!”, they cried. The many conversations which I had on this subject were, no doubt, as accurately measured as the statisticians’ estimates of their accuracy. The aggregated picture is no more on target than their aim.

It is clear that some companies are doing better than others, but it is hard to tell whether the difference lies in their products and services, in their marketing, in their existing client lists or in luck. I suspect that the latter two are more important than product development and marketing teams would like to think.

If I am optimistic for the future, and I am, it is not because of any deep insights or inside knowledge. Recessions have a refining effect, sweeping away weak players and bad business practices. As Richard Susskind said (see Collaborating to avoid the End of Lawyers) the “more for less” challenge will not go away. Those who rise to it should prosper, as those who survived the last two recessions generally prospered – not just because the times improved but because they met the new challenges.

Nevertheless, one of the notable features of last year’s ILTA was the large number of booths set up by small new players. There were not many of them around this year and one cannot help feeling regret at all those hopes and investments which, whether by recession or misjudgement, have failed in the interim. The mood amongst the larger players varied. Quite a number seemed to share my view that, testing though recession is, it gives an incentive  to think differently about the marketing as well as about the products. Perhaps, in a strange way, there is less to lose by trying something different, and we may see some more adventurous stuff on the marketing front.

I am not looking for anything different at next year’s ILTA – this year’s formula was fine by me. Next year it is at the Gaylord Opryland in Nashville, Tennessee between 22 and 26 August. British Airways are not yet quoting prices for that month but you could do a comparable period this September for just over £500 return. This year’s hotel cost me $200 per night. Good though some of the UK conferences are (and you should go to at least one of them as well) there is no equivalent in the UK to these big US conferences. The investment seems to me to be a small one relative to the leg-up you will get there.

If you are interested in joining ILTA, see its application page. You might like also to run your eye over the ILTA09 web site as you reach for next year’s diary. 22 to 26 August 2010 in Nashville.