Making a play to sugar the e-disclosure pill

In a previous post (The discovery of disclosure commonality with a trans-Atlantic judicial panel)  I told how IQPC had, at my suggestion,  invited US Magistrate Judge John Facciola and Chief US Magistrate Judge Paul Grimm to come to their Information Retention and E-Discovery Management Conference last week and then asked me how I would like to make use of their talents.

One answer was the trans-Atlantic judicial panel which I described in that post, with Senior Master Whitaker, HHJ Simon Brown QC, Judge Grimm, Judge Facciola and me, moderated by Patrick Burke of Guidance Software. I have long wanted to do a mock e-disclosure hearing and this seemed a perfect opportunity. I saw one a couple of years ago in London in which Judge Facciola played – naturally – a judge. That had aimed at both US and UK procedures simultaneously and had, I thought, fallen between two stools in doing so. I wanted to do one under the English rules. We have had three cases recently – Digicel v Cable & Wireless, Abela v Hammond Suddards and Hedrich v Standard Bank London which had shown the downsides of not following the co-operation obligations under the Practice Direction to Part 31 CPR. Judge Grimm and Judge Facciola have been eloquent in their criticism of those who do not co-operate to reduce costs and who do not display the level of competence required of those who practice litigation. Why not cast them as the judge hearing an application by advocates who fell short of those standards, using facts similar to those of the English cases?

HHJ Simon Brown QC and barrister Clive Freedman of 3 Verulam Buildings (confusingly not the Mr Freedman who was in the Abela case) sportingly agreed to play the advocates. My introduction included this:

The two who play the judges are not called upon to act at all. What they are going to do here is what they do every day in their courts. Judge Brown and Clive Freedman are taking roles which are entirely at odds with their own views. It would be a mistake to go into Judge Brown’s court and expect to behave as he is about to behave here, and you would rather have Clive Freedman on your side than against you where the disclosure rules are in issue.

I must it clear before we start that although we draw on the words of the judgments which I have mentioned, and some of the facts mentioned in them, we do not attribute to the lawyers involved, or their clients, any of the words or the attitudes which you will see.

The opening premise was that the parties poled up to a Case Management Conference having had no discussions of the type required by Paragraphs 2A.2 of the Practice Direction to Part 31. They were expecting to be before Judge Fuddy as usual, but it appeared that Fuddy had died last week during a hearing (no-one noticed until he was asked to make an order for costs and even then they thought he had fallen into an unusually deep sleep). Fuddy had been replaced by Judge Grimfach, who proved to have two heads and American accent(s).

As they were about to go in, another solicitor came out, tie askew and looking as if he had been mauled by a tiger (Patrick Burke of Guidance Software in a cameo role which recurred during the evening). He made a call to his office: “I come down for a nice easy CMC and get walked over by a trainee from some poxy little firm banging on about e-disclosure, whatever that may be. No, Fuddy kicked the bucket last week. They’ve got some new judge down here, Grimfach or something”. He then turns to the waiting lawyers and says “I hope you are ready for this”. 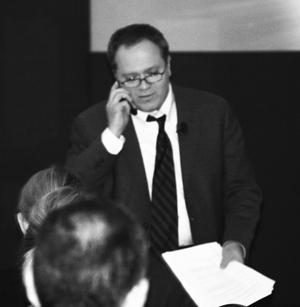 At this point, Judge Grimm called out that the judge should have been called Faccgrimm. I had toyed with this, I confess, but decided against it on the grounds that it sounded a little too much like what an unprepared attorney probably says when he emerges from Judge Grimm’s court.

That set the scene. Act 1 showed the lawyers being sent away to undertake disclosure properly with a form of order similar to the draft standard directions in use in the Mercantile Courts. By the time they returned for Act 2, several weeks later, for their respective applications challenging each others’ disclosure, “Mr Brown” had grasped the idea with enthusiasm unqualified by any idea of proportionality and “Mr Freedman” was still behaving as if electronic documents were of no significance. The scene was set for arguments similar to those in Digicel, Abela and Hedrich. 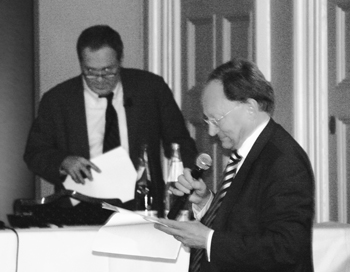 I popped up every so often to put into context what the audience had seen or was about to see. The advocates fell into every trap available and the judges duly shredded them, ending by ordering, amongst other things, that a transcript of the hearing be sent to the clients. The aim was to be a light way of conveying the key points from some fairly lengthy judgments and from some rules which are routinely ignored.

We did not have as much as a run-through before we began, so the performance was the first time I had heard it. I will make some adjustments – an audience new to the subject will need a little more of the actual context from which the scenes were taken; some the chunks of the actual judgments which I put into the mouths of the judges looks good on the page and probably sounded good when delivered as a judgment, but could do with a little pruning. It was fun to do and seemed to go down well.

I will edit it a little, but not much, and use it again – it would be a good way of taking the subject into law firms, where the staff could take on the parts and I could narrate in lieu of standing on a platform with slides.

My thanks to the participants and to IQPC who gave us the venue and an audience which was very pleasing for 6.00 pm on a Thursday night.

Thanks also to Guidance Software who took us out to Rules afterwards for one of the best dinners I have had for a long time.

Thanks to Sonia Perez of Guidance Software for taking the photographs. There are more photographs here.

I have been an English solicitor since 1980. I run the e-Disclosure Information Project which collects and comments on information about electronic disclosure / eDiscovery and related subjects in the UK, the US, AsiaPac and elsewhere
View all posts by Chris Dale →
This entry was posted in Case Management, Court Rules, Courts, CPR, Discovery, E-Discovery Suppliers, eDisclosure, eDisclosure Conferences, eDiscovery, Electronic disclosure, Guidance Software, IQPC, Litigation costs, Part 31 CPR. Bookmark the permalink.