The FSA swoops on the unprepared

The American Museum of Natural History in New York contains many tableaux – scenes of animals and man in various stages of early development. My son and I spent an afternoon in there when LegalTech had ended and I found that I recognised many familar types from the litigation world amongst the figures, most obviously (too obviously perhaps) the dinosaurs of whom I wrote in LegalTech lessons from extinct species.

I have now been through the photographs which I took with half an eye on their value as illustrations to this commentary. You may expect to see pictures of walruses and buffalo who look like judges,  primitive men for whom technology meant flints and whose idea of co-operation involved spears and clubs (you know who I mean,  all you who use discovery / disclosure as a bludgeon) and, of course, dinosaurs.

I am always fascinated by the hidden sub-texts of things like this. I have just been watching Jeremy Paxman’s “Victorians”, a series about 19C art, in which he picked out the little details one might miss, and provided a historic framework from the time, converting an apparently simple painting into social commentary. I once sat with Rupert Maas of the Maas Gallery and the Antiques Roadshow (brother of Jonathan Maas at DLA Piper in London) as he ran his eye over a picture I thought I knew well (but which he did not), picking out detail and adding context which gave a narrative to what had hitherto been just a pleasant picture.

So when I saw the scene below, I recognised that there was more to it than appeared. 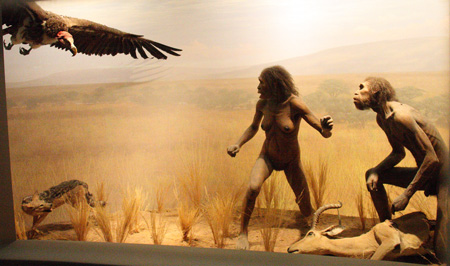 At first sight, it seems obvious what is going on here. It is that couple from The Joy of Sex being interrupted as they prepare an al fresco snack on the beach preparatory to other pleasures. You know how it is – you have just got everything laid out, as it were, and every bloody seagull for miles around turns up. The dog has just finished burying their clothes, and any minute now some ghastly family will appear, trousers rolled up and handkerchiefs on heads and ruin the whole afternoon.

The more I looked at it though, deeper meanings appeared, and I decided that it was an allegory on role reversal. She has taken on the traditional male role of defending the family against external threats whilst he thinks he is great at barbeques, as men seem to do when they get outdoors.

Then the FSA announced its intention of bringing new rigour to its regulatory role, as I wrote yesterday – see Blame Brown and be frightened of the FSA. Regulated businesses, I reckoned, could expect more knocks on the door. The picture took on new meaning. The eagle is the regulator and the dog is one of the 280 new specialist staff members taken on by the FSA. The woman is the compliance officer and her boss is desperately trying to  get the attention of the head of IT who lost interest when his budget request for a legal hold system was turned down last year for the third time.

Click here to find out what they are saying.

I have been an English solicitor since 1980. I run the e-Disclosure Information Project which collects and comments on information about electronic disclosure / eDiscovery and related subjects in the UK, the US, AsiaPac and elsewhere
View all posts by Chris Dale →
This entry was posted in eDiscovery, Electronic disclosure, LegalTech, Litigation Readiness, Litigation Support, Regulatory investigation. Bookmark the permalink.