As the sun sinks slowly in the West we say farewell to LegalTech – or do we?

You are all too young to remember the clichéd ending to those American travel documentaries which always ended with the sun sinking slowly in the West. So am I, despite being old enough to remember telexes and carbon paper as the must-have office equipment. The expression lives on, in the UK at least, because of the Peter Sellers parody “Balham – Gateway to the South”, which itself dates from 1964 – a cliché kept alive by a parody which is itself too old for most to remember. 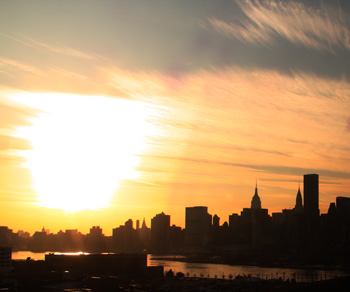 My photograph was taken on the Queensboro Bridge as we left LegalTech for JFK this year, made possible by the generous windows of the large black limousine which Nigel Murray had commandeered at a good rate with a degree of resource doubtless acquired in his army years. This combination of clichés, parodies, sunsets, New York and LegalTech was brought to mind by a slight sense in some quarters that this Leviathan of a show may have had its day.

There were mutterings in the bars and blogs about low attendance, duplicated content, salesmanship masquerading as education and a general sense of a bloat belonging to another era which the Hilton somehow epitomises in these sparer times.

I can see where the thinking comes from, but I do not believe that the end is nigh. Certainly there needs to be a more discriminatory approach to the sessions, with perhaps more focus on what the delegates want to see and less on the income to be made from cramming in as much as possible. It might help if the physical layout of the programme published on the web site were improved – I tried this year to pull out of it those things which have a UK flavour or interest and became aware how confusing it is. Perhaps the organisers themselves would spot the overlaps more readily if the display was better.

Numbers were certainly down, but not by the large percentages which anecdotal evidence suggested. The general consensus was that those who were missing this year were the “tyre kickers”, those who come neither to buy nor to report but to wander the stalls and collect the freebies. That means more room for the rest of us and more time for those who wanted to sell to spend with those who might actually buy.

All this is well captured by Andrew Haslam’s thoughtful summary of this year’s LegalTech. His conclusion, like mine, is upbeat for next year’s event provided that some of the fat is trimmed. The sun will by then have set on a few more suppliers, as well as on some of their law firm clients and the law firms’ corporate clients. Few of the new names which I noted at ILTA in the summer seem to have survived the shock of recessionary winter, but that is the way of markets as in nature. It is not the universal fate of young companies, which tend to be better than the giants at focussing on what people actually want to buy, even without the stimulus of recession. Indeed, being big in any market brings with it the challenge of remembering what made you successful in the first place, and that applies to LegalTech itself as well as to those whose presence makes it possible.

The current big players do seem to have their eye rather more on this than in the past, an eye on where the next round of new buyers will come from and not just aiming at the (ghastly phrase) “low-hanging fruit” of big clients. There are not enough of them to go round, and it makes sense for suppliers to look more widely. There is more attention to ease of use, to more transparent pricing, to education, and to helping clients cut costs – that is not just what the clients want, but what they need to survive, both corporately and as individual decision-makers.

So I do not buy the idea that we are all going to Hell in a handcart, or that LegalTech and the market which supports it are in terminal decline. Recession makes us think like that, but LegalTech will evolve to meet suppliers’ needs just as suppliers are reacting to what their clients want. If it did not exist, something new would appear to meet the demand for an annual showcase, a focal point for big product releases and announcements, and for everyone to gather to exchange ideas. If I were devising such an event, I would come up with a mixture of display space and educational sessions, in a city centrally-placed for US and European players and providing social and cultural as well as business opportunities, in a venue capable of hosting events both grand and intimate, at a time of year when everyone is in working mode. The Hilton in New York in February is about right. The formula, like the suppliers’ products, may need tweaking to new circumstances, but the sun has not set on LegalTech yet.

I have been an English solicitor since 1980. I run the e-Disclosure Information Project which collects and comments on information about electronic disclosure / eDiscovery and related subjects in the UK, the US, AsiaPac and elsewhere
View all posts by Chris Dale →
This entry was posted in Discovery, E-Discovery Suppliers, eDisclosure, eDisclosure Conferences, eDiscovery, Electronic disclosure, Legal Technology, LegalTech, Litigation Support. Bookmark the permalink.